Dynamics Of The Global Wheat Trade Network And Resilience To Shocks 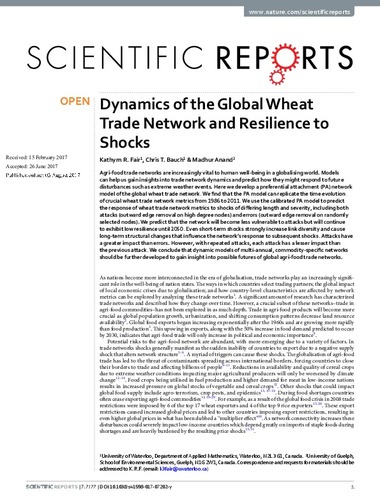 Agri-food trade networks are increasingly vital to human well-being in a globalising world. Models can help us gain insights into trade network dynamics and predict how they might respond to future disturbances such as extreme weather events. Here we develop a preferential attachment (PA) network model of the global wheat trade network. We find that the PA model can replicate the time evolution of crucial wheat trade network metrics from 1986 to 2011. We use the calibrated PA model to predict the response of wheat trade network metrics to shocks of differing length and severity, including both attacks (outward edge removal on high degree nodes) and errors (outward edge removal on randomly selected nodes). We predict that the network will become less vulnerable to attacks but will continue to exhibit low resilience until 2050. Even short-term shocks strongly increase link diversity and cause long-term structural changes that influence the network's response to subsequent shocks. Attacks have a greater impact than errors. However, with repeated attacks, each attack has a lesser impact than the previous attack. We conclude that dynamic models of multi-annual, commodity-specific networks should be further developed to gain insight into possible futures of global agri-food trade networks.