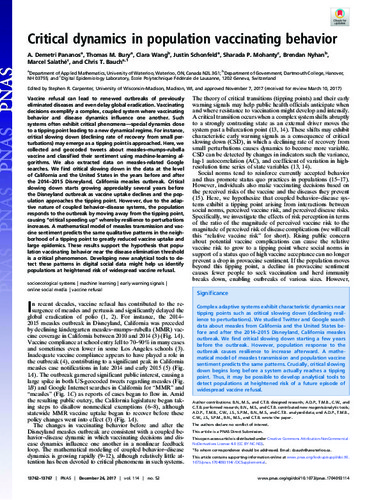 Vaccine refusal can lead to renewed outbreaks of previously eliminated diseases and even delay global eradication. Vaccinating decisions exemplify a complex, coupled system where vaccinating behavior and disease dynamics influence one another. Such systems often exhibit critical phenomena-special dynamics close to a tipping point leading to a new dynamical regime. For instance, critical slowing down (declining rate of recovery from small perturbations) may emerge as a tipping point is approached. Here, we collected and geocoded tweets about measles-mumps-rubella vaccine and classified their sentiment using machine-learning algorithms. We also extracted data on measles-related Google searches. We find critical slowing down in the data at the level of California and the United States in the years before and after the 2014-2015 Disneyland, California measles outbreak. Critical slowing down starts growing appreciably several years before the Disneyland outbreak as vaccine uptake declines and the population approaches the tipping point. However, due to the adaptive nature of coupled behavior-disease systems, the population responds to the outbreak by moving away from the tipping point, causing "critical speeding up" whereby resilience to perturbations increases. A mathematical model of measles transmission and vaccine sentiment predicts the same qualitative patterns in the neighborhood of a tipping point to greatly reduced vaccine uptake and large epidemics. These results support the hypothesis that population vaccinating behavior near the disease elimination threshold is a critical phenomenon. Developing new analytical tools to detect these patterns in digital social data might help us identify populations at heightened risk of widespread vaccine refusal.