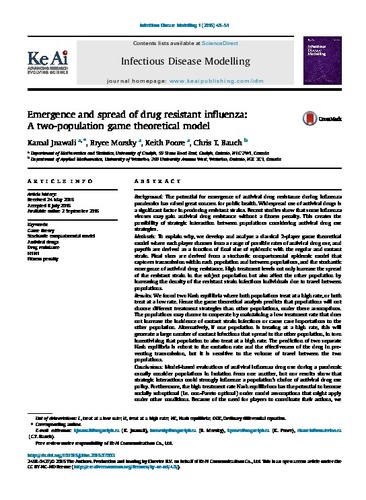 Background The potential for emergence of antiviral drug resistance during influenza pandemics has raised great concern for public health. Widespread use of antiviral drugs is a significant factor in producing resistant strains. Recent studies show that some influenza viruses may gain antiviral drug resistance without a fitness penalty. This creates the possibility of strategic interaction between populations considering antiviral drug use strategies. Methods To explain why, we develop and analyze a classical 2-player game theoretical model where each player chooses from a range of possible rates of antiviral drug use, and payoffs are derived as a function of final size of epidemic with the regular and mutant strain. Final sizes are derived from a stochastic compartmental epidemic model that captures transmission within each population and between populations, and the stochastic emergence of antiviral drug resistance. High treatment levels not only increase the spread of the resistant strain in the subject population but also affect the other population by increasing the density of the resistant strain infectious individuals due to travel between populations. Results We found two Nash equilibria where both populations treat at a high rate, or both treat at a low rate. Hence the game theoretical analysis predicts that populations will not choose different treatment strategies than other populations, under these assumptions. The populations may choose to cooperate by maintaining a low treatment rate that does not increase the incidence of mutant strain infections or cause case importations to the other population. Alternatively, if one population is treating at a high rate, this will generate a large number of mutant infections that spread to the other population, in turn incentivizing that population to also treat at a high rate. The prediction of two separate Nash equilibria is robust to the mutation rate and the effectiveness of the drug in preventing transmission, but it is sensitive to the volume of travel between the two populations. Conclusions Model-based evaluations of antiviral influenza drug use during a pandemic usually consider populations in isolation from one another, but our results show that strategic interactions could strongly influence a population's choice of antiviral drug use policy. Furthermore, the high treatment rate Nash equilibrium has the potential to become socially suboptimal (i.e. non-Pareto optimal) under model assumptions that might apply under other conditions. Because of the need for players to coordinate their actions, we conclude that communication and coordination between jurisdictions during influenza pandemics is a priority, especially for influenza strains that do not evolve a fitness penalty under antiviral drug resistance.