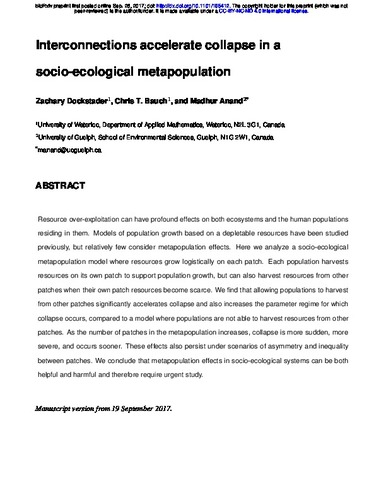 Resource over-exploitation can have profound effects on both ecosystems and the human populations residing in them. Models of population growth based on a depletable resources have been studied previously, but relatively few consider metapopulation effects. Here we analyze a socio-ecological metapopulation model where resources grow logistically on each patch. Each population harvests resources on its own patch to support population growth, but can also harvest resources from other patches when their own patch resources become scarce. We find that allowing populations to harvest from other patches significantly accelerates collapse and also increases the parameter regime for which collapse occurs, compared to a model where populations are not able to harvest resources from other patches. As the number of patches in the metapopulation increases, collapse is more sudden, more severe, and occurs sooner. These effects also persist under scenarios of asymmetry and inequality between patches. We conclude that metapopulation effects in socio-ecological systems can be both helpful and harmful and therefore require urgent study.