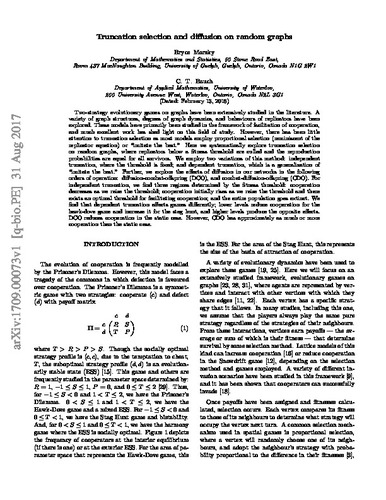 Two-strategy evolutionary games on graphs have been extensively studied in the literature. A variety of graph structures, degrees of graph dynamics, and behaviours of replicators have been explored. These models have primarily been studied in the framework of facilitation of cooperation, and much excellent work has shed light on this field of study. However, there has been little attention to truncation selection as most models employ proportional selection (reminiscent of the replicator equation) or "imitate the best." Here we systematically explore truncation selection on random graphs, where replicators below a fitness threshold are culled and the reproduction probabilities are equal for all survivors. We employ two variations of this method: independent truncation, where the threshold is fixed; and dependent truncation, which is a generalization of "imitate the best." Further, we explore the effects of diffusion in our networks in the following orders of operation: diffusion-combat-offspring (DCO), and combat-diffusion-offspring (CDO). For independent truncation, we find three regimes determined by the fitness threshold: cooperation decreases as we raise the threshold; cooperation initially rises as we raise the threshold and there exists an optimal threshold for facilitating cooperation; and the entire population goes extinct. We find that dependent truncation affects games differently; lower levels reduce cooperation for the hawk-dove game and increase it for the stag hunt, and higher levels produce the opposite effects. DCO reduces cooperation in the static case. However, CDO has approximately as much or more cooperation than the static case.