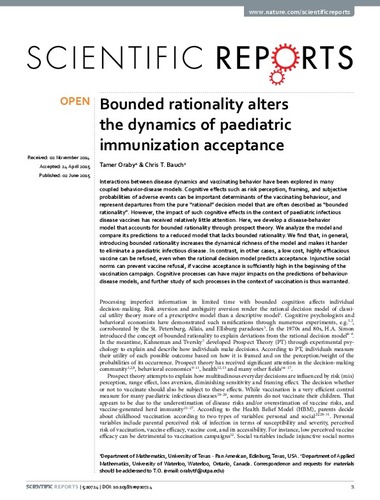 Interactions between disease dynamics and vaccinating behavior have been explored in many coupled behavior-disease models. Cognitive effects such as risk perception, framing, and subjective probabilities of adverse events can be important determinants of the vaccinating behaviour, and represent departures from the pure "rational" decision model that are often described as "bounded rationality". However, the impact of such cognitive effects in the context of paediatric infectious disease vaccines has received relatively little attention. Here, we develop a disease-behavior model that accounts for bounded rationality through prospect theory. We analyze the model and compare its predictions to a reduced model that lacks bounded rationality. We find that, in general, introducing bounded rationality increases the dynamical richness of the model and makes it harder to eliminate a paediatric infectious disease. In contrast, in other cases, a low cost, highly efficacious vaccine can be refused, even when the rational decision model predicts acceptance. Injunctive social norms can prevent vaccine refusal, if vaccine acceptance is sufficiently high in the beginning of the vaccination campaign. Cognitive processes can have major impacts on the predictions of behaviour-disease models, and further study of such processes in the context of vaccination is thus warranted.