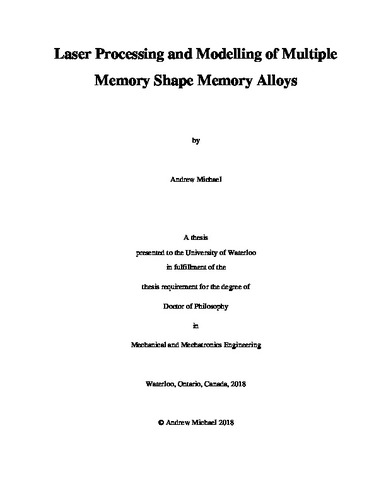 Laser processing of NiTi shape memory alloys (SMA) has been identified as having great potential in surface treatment, welding, and novel performance requirement applications. However, no models have been developed to predict the amount of Ni vaporized based on various laser processing parameters. Additionally, no models have been developed to accurately predict the performance of these novel materials after laser processing. This is a cause for concern regarding efficient development and functional reliability of the laser processed SMAs. Prior to full scale implementation, a better understanding of Ni vaporization rates and the resulting mechanical performance of these materials is required. The first part of this study is concerned with a systematic investigation of the preferential vaporization of Ni during laser processing. The effect of duration and peak power of the laser pulse on the transformation temperature is studied. It was observed that the cooling rate causes segregation of compositions for compositions on the Ti-rich side of the congruency point. Deconvolution of overlapping transformation peaks allowed for approximations of overall bulk composition and Ni loss. A novel model was developed to predict the change in Ni concentration based on laser pulse duration and peak power. In the second part of this study, a novel 1D model is presented for NiTi SMAs with multiple pseudoelastic plateaus. The model is scalable for any number of plateaus present in the material. It can also be adjusted to include residual strain present after unloading the stress. The model was validated by comparing it the experimental data from Multiple Memory Material (MMM). The new model was found to closely match the experimental results. Part of this study relates to accurately characterizing the tensile properties of SMAs. The third part of this study is concerned with 2-D deformation mechanisms. The effect of texture on the bending properties of NiTi is examined. It was successfully demonstrated that the preferred bending curvature of the stress induced martensite can be predicted from the orientation of the crystallographic planes. Part of this work also relates to advancing the understanding surrounding the anisotropic and incompressible behavior of the austenite to R-phase transformation.