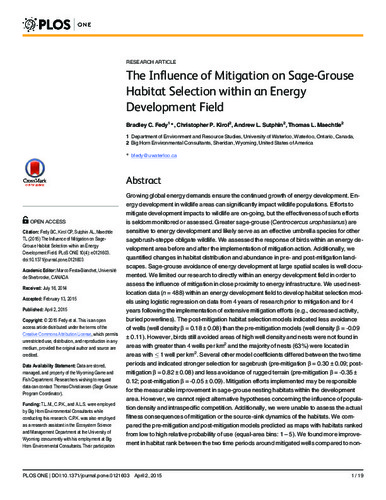 Growing global energy demands ensure the continued growth of energy development. Energy development in wildlife areas can significantly impact wildlife populations. Efforts to mitigate development impacts to wildlife are on-going, but the effectiveness of such efforts is seldom monitored or assessed. Greater sage-grouse (Centrocercus urophasianus) are sensitive to energy development and likely serve as an effective umbrella species for other sagebrush-steppe obligate wildlife. We assessed the response of birds within an energy development area before and after the implementation of mitigation action. Additionally, we quantified changes in habitat distribution and abundance in pre-and post-mitigation landscapes. Sage-grouse avoidance of energy development at large spatial scales is well documented. We limited our research to directly within an energy development field in order to assess the influence of mitigation in close proximity to energy infrastructure. We used nestlocation data (n = 488) within an energy development field to develop habitat selection models using logistic regression on data from 4 years of research prior to mitigation and for 4 years following the implementation of extensive mitigation efforts (e.g., decreased activity, buried powerlines). The post-mitigation habitat selection models indicated less avoidance of wells (well density beta = 0.18 +/- 0.08) than the pre-mitigation models (well density beta = -0.09 +/- 0.11). However, birds still avoided areas of high well density and nests were not found in areas with greater than 4 wells per km(2) and the majority of nests (63%) were located in areas with <= 1 well per km(2). Several other model coefficients differed between the two time periods and indicated stronger selection for sagebrush (pre-mitigation beta = 0.30 +/- 0.09; postmitigation beta = 0.82 +/- 0.08) and less avoidance of rugged terrain (pre-mitigation beta = -0.35 +/- 0.12; post-mitigation beta = -0.05 +/- 0.09). Mitigation efforts implemented may be responsible for the measurable improvement in sage-grouse nesting habitats within the development area. However, we cannot reject alternative hypotheses concerning the influence of population density and intraspecific competition. Additionally, we were unable to assess the actual fitness consequences of mitigation or the source-sink dynamics of the habitats. We compared the pre-mitigation and post-mitigation models predicted as maps with habitats ranked from low to high relative probability of use (equal-area bins: 1 -5). We found more improvement in habitat rank between the two time periods around mitigated wells compared to non-mitigated wells. Informed mitigation within energy development fields could help improve habitats within the field. We recommend that any mitigation effort include well-informed plans to monitor the effectiveness of the implemented mitigation actions that assess both habitat use and relevant fitness parameters.