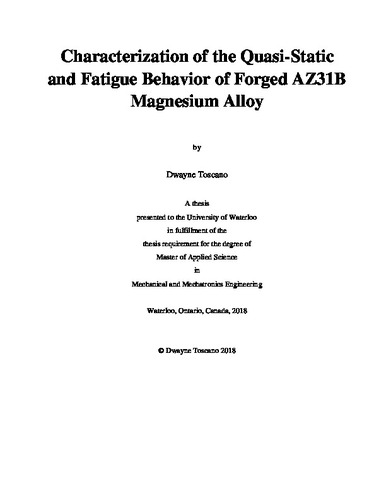 Light-weighting is being aggressively targeted by automotive manufacturers as a method to reduce emissions. Magnesium (Mg) alloys due to their low density and high specific strength have therefore gained significant interest for automotive applications. As cyclic loading is a major concern for load-bearing automotive components, this thesis aims to characterize the fatigue response of AZ31B Mg alloy that may be forged to its final component geometry. Initially, the effect of open die forging on cast AZ31B alloy was investigated. A partially refined microstructure with strong basal texture was developed in forged material. Tensile yield and ultimate strengths increased by a remarkable 143 percent and 23 percent respectively whereas the compressive yield strength was unchanged owing to the activation of extension twins for both conditions. Nevertheless, the ultimate compressive strength for the forged material increased by 22 percent compared to the as-cast material. The influence of open-die forging on the low cycle fatigue (LCF) behavior of cast AZ31B was also investigated. The forged material was generally found to exhibit longer fatigue life and also achieved significantly higher stresses at the same level of total strain amplitude compared to cast AZ31B. The Smith-Watson-Topper (SWT) model and Jahed-Varvani (JV) energy model were employed and both models accurately predicted the experimentally obtained fatigue life of both cast and forged alloy conditions. Next, the effect of processing temperature and pre-form condition on the quasi-static response, and stress-controlled fatigue behavior of closed-die forged AZ31B Mg alloy was investigated. The forging process was conducted on billets of cast as well as extruded AZ31B at temperatures of 250°C and 375°C and a forging rate of 20mm/s. The obtained mechanical test results showed a strong influence of processing temperature and initial material condition on the mechanical response of the forged product. For a given starting condition (either cast or extruded) a lower forging temperature resulted in superior quasi-static and cyclic properties whereas for a given processing temperature, the extruded starting billet displayed better mechanical properties compared to its cast counterpart post-forging. Extruded AZ31B forged at 250°C was observed to yield the best overall mechanical properties. Finally, quasi-static tension and shear tests in addition to cyclic axial and cyclic shear tests were also performed to characterize the uniaxial cyclic response of the previously determined optimal forgings. The cyclic axial behavior of the forging was superior to the starting extruded material while the cyclic shear behavior was comparable to low cycle behavior of extruded AZ31B in literature. Multi-axial fatigue tests revealed an increase in cyclic hardening as a result of non-proportionality however, overall fatigue life showed only a weak sensitivity of phase difference. A modified SWT model and Jahed-Varvani (JV) model were developed using the uniaxial cyclic test results. The modified SWT model was found to provide good life prediction for all the tested multi-axial load cases. The multi-axial formulation of the JV model yields good life predictions for in-phase and 45° out-of-phase multi-axial scenarios but slightly over-predicts fatigue life for certain 90° out-of-phase loading cases.