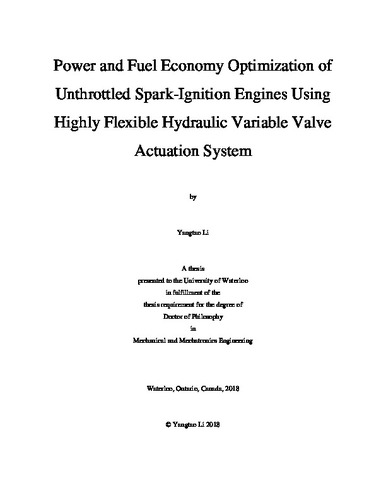 Variety of technologies along with the mechanisms for their implementations have been developed in order to pursue possible improvements in the performance and efficiency of gasoline engines. Yet, most of the commonly used techniques, such as the cam-based variable valve timings (VVT) and variable compression ratio (VCR), are realized by different kinds of complicated mechanisms, providing an extended but still relatively limited adjustability, for attaining improved valve timings and different engine cycles according to the varying working conditions of the engine. The hydraulic variable valve actuation (HVVA) system, however, can provide greater freedoms to the engine valve motions than most of the traditional cam-based valve train systems do. By considering the characteristics of the HVVA system, the strategies of putting its outstanding flexibilities into use for further improving the performances of gasoline engines with respect to power and fuel economy are developed in this research. By utilizing the flexibility offered by the HVVA system, a set of new valve motion strategies is developed for realizing an unthrottled engine load control. In this research, the late exhaust valve closure (LEVC) and early intake valve closure (EIVC) strategies are adopted at the same time for granting the engine an internal exhaust gas recirculation (IEGR) feature and together evolved into a tunable IEGR scheme for fulfilling the partial engine loads without throttling. Alternatively, the realization to the proposed variable Atkinson cycle (VAC), which is realized by late intake valve closures (LIVCs), can also achieve the same goal of unthrottled engine load control for partial load operations. Moreover, an HVVA engine model is proposed and built in GT-suite, which is able to capture the interdependencies of the HVVA system and the engine operations, and is as well carefully calibrated by experimental data acquired from individual bench tests of the HVVA system and the baseline engine. The HVVA engine in this research is a converted from a baseline single-cylinder engine and is able to carry out a variable Otto cycle (VOC) at full engine load operations for achieving higher power performance while realizing a variable Atkinson cycle (VAC) or a tunable IEGR feature at partial engine load operations for gaining better fuel economy without having any further modifications or attaching additional components to the engine. In addition, a set of genetic algorithm (GA)-based optimization schemes is also developed for identifying the proper operating parameters of the HVVA engine when adopting any of the proposed engine operation schemes. A MATLAB-Simulink and GT-Suite coupling simulation structure is proposed for carrying out the GA approaches. Furthermore, these GA optimizers are designed to be capable of maintaining their proper functionality while non-linear constraints are taken into considerations. By running the HVVA engine with the optimized operating parameters identified by the proposed GA optimizations, noticeable improvements on the engine outputs at full load operations and fuel economy at partial load operations are revealed. Benefited from the features of the HVVA system, the tunings of the HVVA engine can be flexibly customized to fulfill any requirements towards different desired engine characteristics. At last, with the corresponding operating parameters be optimized by the proposed GA optimization techniques, all the proposed HVVA valve motion strategies are carried out by an actual prototype HVVA engine and are qualitatively validated by experiments. The experimental results are showing expected outcomes on the improvements to the engine's power and fuel economy performances under corresponding operations. A power improvement of 12.3% is noticed from the experiments by running the HVVA engine in the proposed VOC operation at the exemplary 1000rpm engine speed. In addition, comparing to the throttled operation of the baseline engine, the experiment studies show also the HVVA engine is able to run with leaner air-fuel mixtures to achieve the same desired partial engine load operations by adopting the IEGR scheme or the VAC operation. With an adopted air-fuel ratio (AFR) of 16.1 for the IEGR scheme and 16.3 for the VAC scheme, the engine could realize the same exemplary speed-load operation of 1000rpm/5.2Nm, while the baseline engine with throttling load control requires an AFR of 14.7 to achieve the same partial load operation.