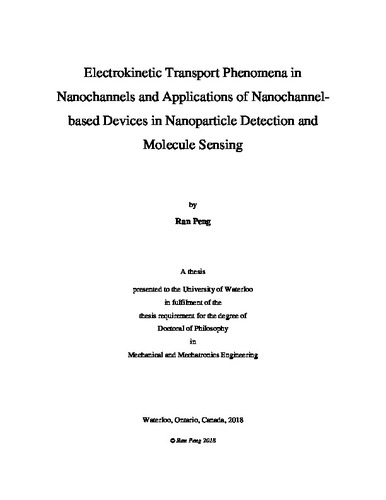 Nanofluidics investigates transport phenomena, manipulation, and control of fluids and nano-sized objects in fluidic channels with an at least one-dimensional size smaller than 100 nm. At the nanoscale, fluids and objects exhibit lots of unique physical and mechanical behaviors which cannot be observed in micron-sized or macro-sized structures, especially for electrokinetically driven cases. Electrokinetic transport phenomena in nanochannels offer promising possibilities for new applications of nanofluidic systems, such as drug delivery, DNA sequencing, and biosensing. However, the current widely-used nanofabrication technologies are complicated, time-consuming and expensive. Fundamental research of electrokinetic transport phenomena at the nanoscale has been focused on analytical and numerical models, and very limited experimental studies have been conducted. Resistive pulse sensing (RPS) technology has been integrated with nanofluidics and applied in nanoparticle characterization; however, traditional nano-orifice-based RPS detection systems are not suitable for practical applications due to their bulky size, low sensitivity, and high cost. This thesis studies electrokinetic transport phenomena in polydimethylsiloxane (PDMS) nanochannels, as well as applications of nanochannel-based nanofluidic devices in nanoparticle detection and molecule sensing. At the beginning of this thesis, a cost-effective, productive and simple method for fabricating disposable PDMS nanofluidic devices by the solvent-induced cracking method and nanoimprint technique is developed. The channel size is controlled by the working parameters of the solvent-induced cracking method while the quantity and locations of these nanocracks are determined by artificial defects. A detailed guideline for making PDMS nanofluidic chips with single nanochannels or multiple nanochannels of controllable channel size and spacing is provided. Nanochannels of 20 nm in depth can be obtained easily by using this method. Two fundamental research projects are conducted on single-nanochannel-based nanofluidic chips to investigate electrokinetically driven fluids and particles in nanochannels. Electroosmotic flow (EOF) in single nanochannels is measured by the current slope method. Channel size effects, concentration effects and electric field effects upon EOF velocity in nanochannels are investigated systematically. The decrease of EOF velocity due to overlapping of electric double layers (EDLs) is demonstrated by experiments. The experimental results are in good agreement with the numerical simulation results. Electrokinetic (EK) motion of single nanoparticles in single PDMS nanochannels is investigated by particle tracing method systematically. Effects of ionic concentration of the electrolyte media, applied electric field, and particle-to-channel size ratio on particle velocity are studied. The velocity of nanoparticles inside the single nanochannels is suppressed by the confined nanospace due to interactions between EDLs. Lastly, by using the nanochannel-based nanofluidic chips, two applications are developed to detect nanoparticles, cations as well as DNA molecules by the RPS technique. A mathematic model for single-gate differential RPS detection systems is developed to evaluate the RPS signals; working parameters involved in particle detection by using the nanochannel-based differential RPS chips are studied experimentally. The signal-to-noise ratio (SNR) of the PDMS nanochannel-based differential RPS systems is also explored by experiments. To enhance the resolution of the nanochannel-based RPS devices, carbon nanotubes (CNTs) are integrated into differential RPS nanofluidic chips to work as the sensing gates. Novel methods to isolate and cut individual CNTs for CNT-based nanofluidic devices are also created. The CNT-channel-based differential RPS chips are used to detect single cations and individual ssDNA molecules. Distinguishing of 15-nt ssDNAs and 30-nt ssDNAs with high resolution has been achieved. This thesis provides the nanofluidic research community with a comprehensive working procedure for fabricating cost-effective PDMS-based nanofluidic chips. The fundamental studies in this thesis expand our understanding of electrokinetic transport phenomena at the nanoscale, and the differential RPS detection systems developed on the nanochannel-based nanofluidic chips open a new avenue to nanoparticle detection as well as molecule sensing.