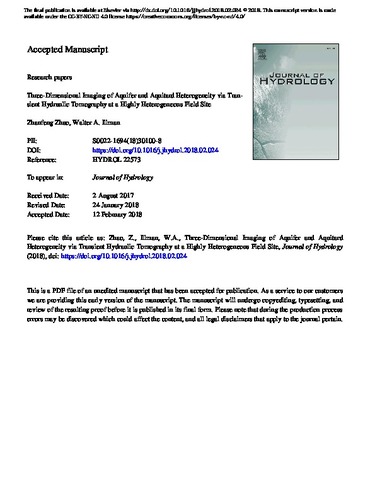 Previous studies have shown that geostatistics-based transient hydraulic tomography (THT) is robust for subsurface heterogeneity characterization through the joint inverse modeling of multiple pumping tests. However, the hydraulic conductivity (K) and specific storage (Ss) estimates can be smooth or even erroneous for areas where pumping/observation densities are low. This renders the imaging of interlayer and intralayer heterogeneity of highly contrasting materials including their unit boundaries difficult. In this study, we further test the performance of THT by utilizing existing and newly collected pumping test data of longer durations that showed drawdown responses in both aquifer and aquitard units at a field site underlain by a highly heterogeneous glaciofluvial deposit. The robust performance of the THT is highlighted through the comparison of different degrees of model parameterization including: (1) the effective parameter approach; (2) the geological zonation approach relying on borehole logs; and (3) the geostatistical inversion approach considering different prior information (with/without geological data). Results reveal that the simultaneous analysis of eight pumping tests with the geostatistical inverse model yields the best results in terms of model calibration and validation. We also find that the joint interpretation of long-term drawdown data from aquifer and aquitard units is necessary in mapping their full heterogeneous patterns including intralayer variabilities. Moreover, as geological data are included as prior information in the geostatistics-based THT analysis, the estimated K values increasingly reflect the vertical distribution patterns of permeameter-estimated K in both aquifer and aquitard units. Finally, the comparison of various THT approaches reveals that differences in the estimated K and Ss tomograms result in significantly different transient drawdown predictions at observation ports.