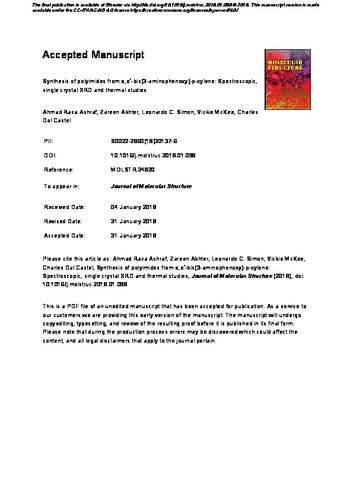 The meta-catenated ether-based diamine monomer α,αʹ-bis(3-aminophenoxy)-p-xylene (3APX) was synthesized from dinitro precursor α,αʹ-bis(3-nitrophenoxy)-p-xylene (3NPX). FTIR, 1H and 13C NMR spectroscopic studies accompanied by elemental analysis were performed for structural elucidations of 3NPX and 3APX. The spatial orientations of 3APX were explored by single crystal X-ray diffraction analysis. Its crystal system was found to be monoclinic, adopting the space group P21/c. The synthesized diamine monomer (3APX) was used for preparation of new series of polyimides by reacting with three different dianhydrides (BTDA, ODPA, 6FDA). The relevant copolyimides were developed via incorporation of 4,4ʹ-methylenedianiline (MDA) in the backbone of afore-synthesized polyimides. The structures of polyimides and copolyimides were verified by FTIR and 1H NMR spectroscopic techniques. Their properties were evaluated by dynamic and isothermal TGA (nitrogen and air atmospheres) and WAXRD studies. Polyimides displayed significantly high thermal stability as their degradation started around 400 °C and it was improved further by execution of copolymerization strategy with MDA. The 5% weight loss temperature (T5) of polyimides under nitrogen atmosphere was in the range of 425–460 °C while for copolyimides it increased to 454–498 °C. Thermal decomposition in air was slower than nitrogen between 400 and 550 °C however it was accelerated above 550 °C. Isothermal TGA disclosed that copolyimides have the ability to endure elevated temperatures for extended period. WAXRD analysis showed the amorphous nature of polyimides and copolyimides.