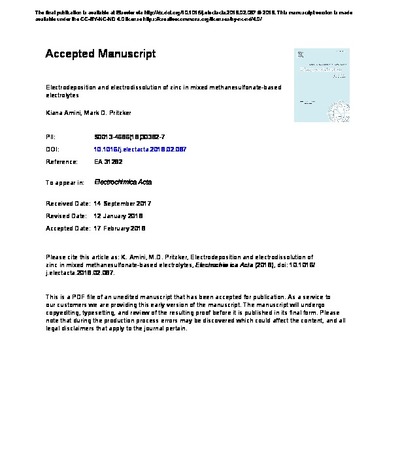 Zinc electrodeposition and electrodissolution in methanesulfonic acid (MSA) electrolytes mixed with chloride or sulfate are investigated in a 3-electrode cell for eventual use in divided and undivided zinc-cerium redox flow batteries (RFB). Cyclic voltammetry and polarization experiments show that the addition of chloride to methanesulfonate-based electrolytes shifts the nucleation potential in the positive direction, lowers the nucleation overpotential and enhances the kinetics of Zn deposition and subsequent dissolution relative to that achieved when sulfate is added or MSA is the only anion present. In addition, the diffusion coefficient of Zn(II) and the resulting limiting current density for Zn deposition have been found to be moderately higher in mixed methanesulfonate/chloride media than when chloride is absent. The effects of temperature, MSA concentration, Zn(II) concentration and current density on the Zn/Zn(II) system have also been investigated under potentiostatic and galvanostatic conditions. Although an increase in temperature and/or MSA concentration tends to lower the charge efficiency for Zn deposition in both mixed and MSA-only electrolytes due to the higher rate of hydrogen evolution, the amount of zinc deposited, charge and voltage efficiency always remain significantly higher in the mixed methanesulfonate/chloride media than the pure MSA media. Thus, the use of a mixed methanesulfonate/chloride media should enable both divided and undivided zinc-cerium RFBs to operate over a wider range of temperatures and MSA concentrations compared to the case with pure MSA electrolyte. The addition of sulfate to MSA-based electrolytes, however, does not improve the performance of the Zn/Zn(II) system relative to that possible in the MSA-only electrolytes.