The Sense of Self and Sensorimotor Functions 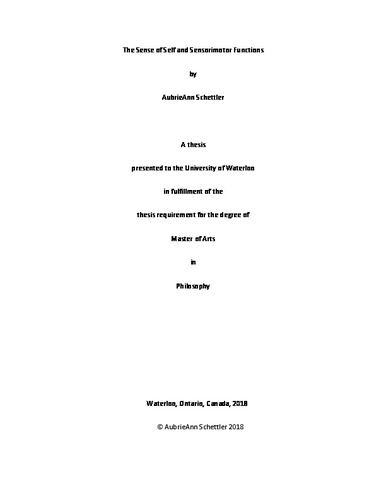 This thesis investigates whether biological sex and motor function have a role in the visual representation of the self. The principal contribution is a new virtual reality experiment that systematically varied an avatar’s sex and motion, after which participants recorded judgments about the relationship between themselves and the avatar. Virtual reality aims to produce the authentic experience of being present or the feeling of being there in an artificial environment. The third person perspective is similar to looking at oneself in a mirror but different than the first-person perspective, which places the user inside the body of the avatar, which are virtual simulated characters that can act as a visual representation of the self. The experiment assessed the role of biological sex and self-motion by presenting participants with pairs of avatars that visually represent the participant (“self avatar”), or another person (“opposite avatar”). Additionally, the avatars’ motion either corresponded to the participant’s motion, or was decoupled from the participant’s motion. Decoupled motion consisted of swaying slightly from side to side. By manipulating sex and motion, I tested whether these aspects affect how participants perceive themselves. The results support the conclusion that sex and normal motion both affect the visual representation of the self. These results relate to two theories of bodily awareness: the representationalist theory and sensorimotor theory. These theories explain how individuals come to have awareness of their bodies from the inside. While the representational theory focuses on sensorimotor representations, the sensorimotor theory focuses on sensorimotor functions and voluntary action. The results relate to the representational theory because sex and motion are both relevant to the body schema and body image. Although there is no consensus among researchers of their definitions, body schema is generally regarded as an unconscious, bottom-up, dynamic representation, relying on proprioceptive information from the muscles, joints, and skin. On the other hand, the body image is a more conscious, top down, cognitive representation, incorporating semantic knowledge of the body, and mostly used to make perceptual judgements. The results relate to the sensorimotor approach since motion and sensorimotor functions were manipulated. This finding is limited, however, by the fact that participants were not affected by motion in some trials.