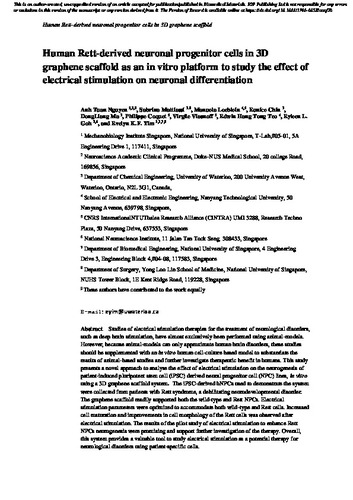 Studies of electrical stimulation therapies for the treatment of neurological disorders, such as deep brain stimulation, have almost exclusively been performed using animal-models. However, because animal-models can only approximate human brain disorders, these studies should be supplemented with an in vitro human cell-culture based model to substantiate the results of animal-based studies and further investigate therapeutic benefit in humans. This study presents a novel approach to analyze the effect of electrical stimulation on the neurogenesis of patient-induced pluripotent stem cell (iPSC) derived neural progenitor cell (NPC) lines, in vitro using a 3D graphene scaffold system. The iPSC-derived hNPCs used to demonstrate the system were collected from patients with Rett syndrome, a debilitating neurodevelopmental disorder. The graphene scaffold readily supported both the wild-type and Rett NPCs. Electrical stimulation parameters were optimized to accommodate both wild-type and Rett cells. Increased cell maturation and improvements in cell morphology of the Rett cells was observed after electrical stimulation. The results of the pilot study of electrical stimulation to enhance Rett NPCs neurogenesis were promising and support further investigation of the therapy. Overall, this system provides a valuable tool to study electrical stimulation as a potential therapy for neurological disorders using patient-specific cells.