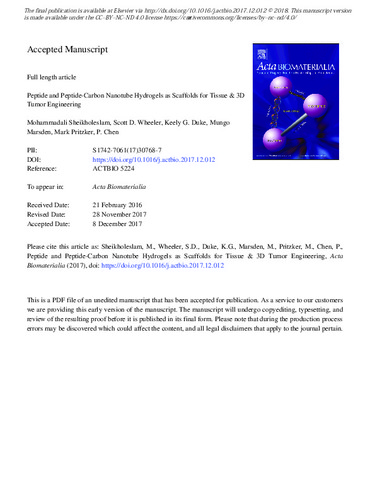 The use of hybrid self-assembling peptide (EFK8)-carbon nanotube (SWNT) hydrogels for tissue engineering and in vitro 3D cancer spheroid formation is reported. These hybrid hydrogels are shown to enhance the attachment, spreading, proliferation and movement of NIH-3T3 cells relative to that observed using EFK8-only hydrogels. After five days, ∼30% more cells are counted when the hydrogel contains SWNTs. Also, 3D encapsulation of these cells when injected in hydrogels does not adversely affect their behavior. Compressive modulus measurements and microscopic examination suggest that SWNTs have this beneficial effect by providing sites for cell anchorage, spreading and movement rather than by increasing hydrogel stiffness. This shows that the cells have a particular interaction with SWNTs not shared with EFK8 nanofibers despite a similar morphology. The effect of EFK8 and EFK8-SWNT hydrogels on A549 lung cancer cell behavior is also investigated. Increasing stiffness of EFK8-only hydrogels from about 44 Pa to 104 Pa promotes a change in A549 morphology from spheroidal to a stretched one similar to migratory phenotype. EFK8-SWNT hydrogels also promote a stretched morphology, but at lower stiffness. These results are discussed in terms of the roles of both microenvironment stiffness and cell-scaffold adhesion in cancer cell invasion. Overall, this study demonstrates that applications of peptide hydrogels in vitro can be expanded by incorporating SWNTs into their structure which further provides insight into cell-biomaterial interactions. Statement of significance For the first time we used hybrid self-assembling peptide-carbon nanotube hybrid hydrogels (that we have recently introduced briefly in the “Carbon” journal in 2014) for tissue engineering and 3D tumor engineering. We showed the potential of these hybrid hydrogels to enhance the efficiency of the peptide hydrogels for tissue engineering application in terms of cell behavior (cell attachment, spreading and migration). This opens up new rooms for the peptide hydrogels and can expand their applications. Also our system (peptide and peptide-CNT hydrogels) was used for cancer cell spheroid formation showing the effect of both tumor microenvironment stiffness and cell-scaffold adhesion on cancer cell invasion. This was only possible based on the presence of CNTs in the hydrogel while the stiffness kept constant. Finally it should be noted that these hybrid hydrogels expand applications of peptide hydrogels through enhancing their capabilities and/or adding new properties to them.