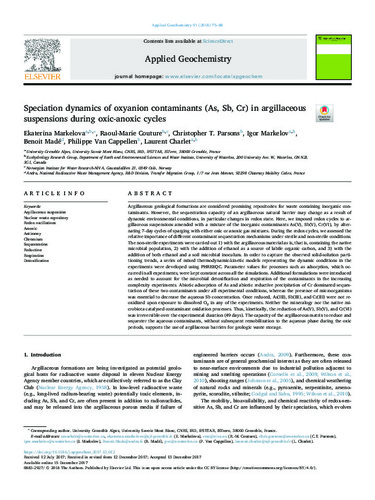 Argillaceous geological formations are considered promising repositories for waste containing inorganic contaminants. However, the sequestration capacity of an argillaceous natural barrier may change as a result of dynamic environmental conditions, in particular changes in redox state. Here, we imposed redox cycles to argillaceous suspensions amended with a mixture of the inorganic contaminants As(V), Sb(V), Cr(VI), by alternating 7-day cycles of sparging with either oxic or anoxic gas mixtures. During the redox cycles, we assessed the relative importance of different contaminant sequestration mechanisms under sterile and non-sterile conditions. The non-sterile experiments were carried out 1) with the argillaceous material as is, that is, containing the native microbial population, 2) with the addition of ethanol as a source of labile organic carbon, and 3) with the addition of both ethanol and a soil microbial inoculum. In order to capture the observed solid-solution partitioning trends, a series of mixed thermodynamic-kinetic models representing the dynamic conditions in the experiments were developed using PHREEQC. Parameter values for processes such as adsorption, which occurred in all experiments, were kept constant across all the simulations. Additional formulations were introduced as needed to account for the microbial detoxification and respiration of the contaminants in the increasing complexity experiments. Abiotic adsorption of As and abiotic reductive precipitation of Cr dominated sequestration of these two contaminants under all experimental conditions, whereas the presence of microorganisms was essential to decrease the aqueous Sb concentration. Once reduced, As(III), Sb(III), and Cr(III) were not re-oxidized upon exposure to dissolved O2 in any of the experiments. Neither the mineralogy nor the native microbiota catalysed contaminant oxidation processes. Thus, kinetically, the reduction of As(V), Sb(V), and Cr(VI) was irreversible over the experimental duration (49 days). The capacity of the argillaceous matrix to reduce and sequester the aqueous contaminants, without subsequent remobilization to the aqueous phase during the oxic periods, supports the use of argillaceous barriers for geologic waste storage.