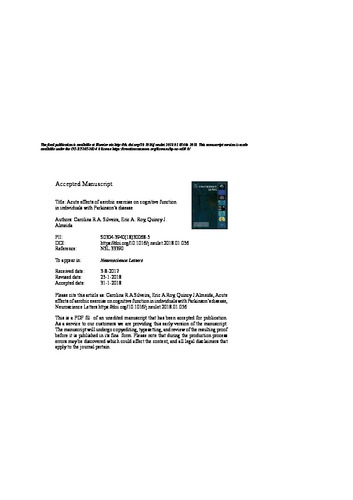 Deficits in executive functions are highly prevalent in Parkinson’s disease (PD). Although chronic physical exercise has been shown to improve executive functions in PD, evidence of acute exercise effects is limited. This study aimed to evaluate the effects of an acute bout of exercise on cognitive processes underlying executive functions in PD. Twenty individuals with PD were assessed in both a Control and an Exercise conditions. In each condition, individuals started performing a simple and a choice reaction time (RT) task. Subsequently, participants were asked to sit on a cycle ergometer (Control) or cycle (Exercise) for 20 min in counterbalanced order. Participants were asked to repeat both reaction time tasks after 15-min rest period in both conditions. While no differences were found in simple RT, participants showed faster choice RT post Exercise as well as Control conditions (p = .012). Participants had slower choice RT for target stimulus compared to non-target stimuli irrespective of time or experimental condition (p < .001). There was no change in accuracy following experimental conditions. Results suggest that individuals with PD may not respond behaviourally to a single bout of exercise. The lack of selective effects of exercise on cognition suggests that practice effects may have influenced previous research. Future studies should assess whether neurophysiological changes might occur after an acute bout of exercise in PD.