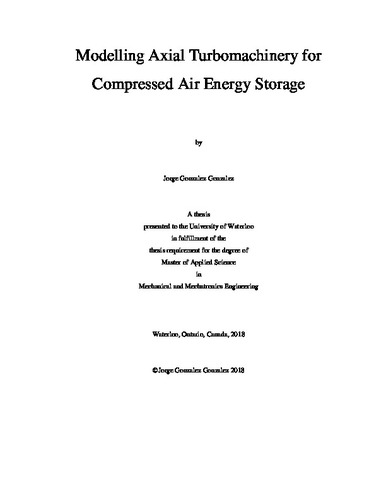 Climate change and negative environmental effects from a human’s life style have ignited the search for grid-scale electricity production from renewable energy sources. Significant advances with respect to renewable energy conversion into electricity has been achieved in recent years. However, their integration with the electrical grid is still an unsolved problem because the natural intermittency associated with them. Grid-scale energy storage can be the solution to the intermittency problem; of all the types or storage, compressed air energy storage (CAES) is one of the most promising potential solutions to effectively integrate renewable energies to the grid. CAES consists in compressing air during times when the electricity production is larger than the demand. This compressed air is stored in a huge reservoir; it is then used during peak demand times to run gas turbines which are connected to power generators. Literature about steady state CAES is widely available; topics such as system efficiency, fuel free CAES, and reservoir sizing being arguably the most commonly published. However, there are very few works about dynamic state of a CAES system; and there are next to no publications regarding the transient modelling of the turbomachinery for CAES. This thesis develops two independent dynamic models of axial turbomachines for CAES systems; one for a compressor and one for a turbine. These models should be able to represent the behavior of the machines, as well as easily connect with the rest of the components of the system. For these reasons, the models are developed in the SIMULINK® environment, which is a tool commonly used for electrical modelling. The models use the time domain, and are based on compressor and turbine performance maps, which make them representative, and let them require a short simulation time. The objective of the simulations is to see how the models behave with regards to power inefficiency, part-load operation; and the effects on the complete operation caused by the system inertias. The models can replicate the operation of any axial turbomachine provided the respective map, and can be also used with centrifugal compressors. Upon running the simulations, a round trip efficiency of 55% was obtained. Furthermore, it takes 296 seconds to increase the pressure of a cavern of 3000 m3 from 422.18 Kpa to 747.4 Kpa. The simulated turbine of 167 MW and design speed of 17000 rpm, with a nominal mass flow rate of 400 kg/s, will take 778 seconds to reach its nominal speed.