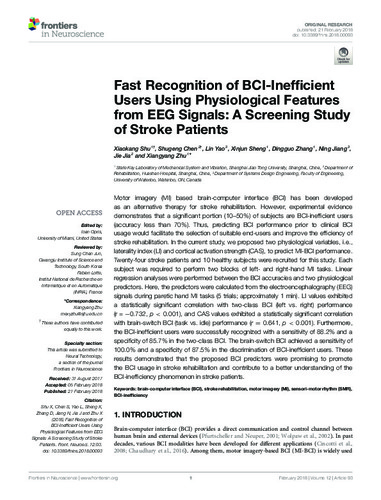 Motor imagery (MI) based brain-computer interface (BCI) has been developed as an alternative therapy for stroke rehabilitation. However, experimental evidence demonstrates that a significant portion (10% to 50%) of subjects are BCI-illiterate users (accuracy less than 70%). Thus, predicting BCI performance prior to clinical BCI usage would facilitate the selection of suitable end-users and improve the efficiency of stroke rehabilitation. In the current study, we proposed two physiological variables, i.e., laterality index (LI) and cortical activation strength (CAS), to predict MI-BCI performance. Twenty-four stroke patients and ten healthy subjects were recruited for this study. Each subject was required to perform two blocks of left- and right-hand MI tasks. Linear regression analyses were performed between the BCI accuracies and two physiological predictors. Here, the predictors were calculated from the electroencephalography (EEG) signals during paretic hand MI tasks (5 trials; approximately one minute). LI values exhibited a statistically significant correlation with two-class BCI (left vs. right) performance (r=-0.732, p<0.001), and CAS values exhibited a statistically significant correlation with brain-switch BCI (task vs. idle) performance (r=0.641, p<0.001). Furthermore, the BCI-illiterate users were successfully recognized with a sensitivity of 88.2% and a specificity of 85.7% in the two-class BCI. The brain-switch BCI achieved a sensitivity of 100.0% and a specificity of 87.5% in the discrimination of BCI-illiterate users. These results demonstrated that the proposed BCI predictors were promising to promote the BCI usage in stroke rehabilitation and contribute to a better understanding of the BCI-illiteracy phenomenon in stroke patients.