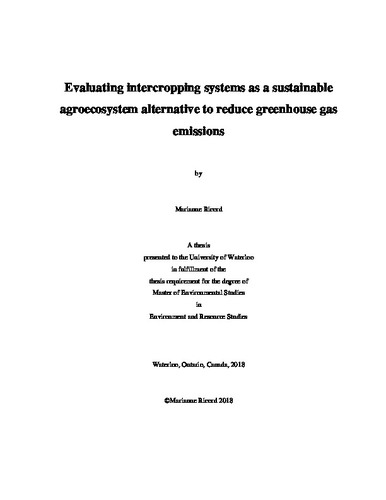 Sole crops are commonly used in the most productive agricultural area in Argentina, the Pampas, and represent the biggest land-area in the country, and the most responsible for the release of greenhouse gas emissions to the atmosphere. For this reason, the Government has adopted sustainable practices such as intercropping systems (e.g., cereal-legume) to increase soil organic carbon and soil organic matter. An increase in soil organic matter has proven to capture greater amounts of carbon dioxide (CO₂), a threatening greenhouse gas for climate change. In addition, it has shown to decrease nitrogen losses in the form of nitrous oxide (N₂O), which is more potent than CO₂. Agricultural soils are the main contributor to increased atmospheric nitrous oxide (N₂O) concentrations with negative impacts on global climate. In Latin America, Argentina has been enlisted as one of the highest emitters of N₂O emissions. In fact, almost half of their emissions originate from cropping systems, especially, sole crops, which tend to lose higher soil organic carbon. Cereal-legume intercrops are beneficial due to the complementary and simultaneous usage of carbon (C) and nitrogen (N) that helps to promote greater storage of C and reduce N losses. Due to the positive cycling of both elements in the intercrops, this helps to store C and N more effectively and reduce greenhouse gases in the soil in the long term, making them more sustainable and beneficial with respect to climate change. Although intercropping systems have shown a vast array of benefits there is still an urge to evidence that intercrop systems can reduce both CO₂ and N₂O emissions compared to sole crop systems. The objective of this study was to determine the capacity of a cereal-legume intercrop to lower both greenhouse gases under nitrifying and denitrifying conditions, compared to a cereal and legume sole crop. Results showed that mean CO₂ emissions in the nitrification ranged from 1.77 to 2.22 mg CO₂-C g-¹ h-¹ in the fertilized group while in the unfertilized group ranged from 1.61 to 1.92 mg CO₂-C g-¹ h-¹. Conversely, N₂O emissions in the nitrification ranged from 0.48 to 1.64 µg N₂O-N g-¹ h-¹. in the fertilized group to 0.43 to 0.56 µg N₂O-N g-¹ h-¹ in the unfertilized group. Under nitrification conditions (60% water-filled-pore-space) in the fertilized group, the maize sole crop and intercrop mean N₂O emissions were 1.64 and 0.48 µg N₂O-N g-¹ h-¹, respectively. The CO₂ mean emissions favoured by the nitrification in the maize sole crop, soybean sole crop, and intercrop were 2.22, 1.77, and 2.20 mg CO₂-C g-¹ h-¹, respectively. Nonetheless, throughout the 48 hours of the incubation experiment, these results were not significantly different. Meanwhile, under denitrification conditions mean N₂O emissions of soybean sole crop (80% water-filled-pore-space) resulted in 12.74 µg N₂O-N g-¹ h-¹ and were higher than maize sole crop and intercrop (12.28 and 9.37 µg N₂O-N g-¹ h-¹, respectively). Overall, the emissions followed lower increases of N₂O under the influence of intercropping systems in both nitrification and denitrification processes. In the nitrification, however, maize sole crops had a greater soil ammonium concentration (5.82 g N gdw-¹) which seem to explain higher N₂O emissions compared to intercrop systems (5.51 g N gdw-¹). Nitrate concentrations under nitrification were the lowest in the intercrops (1.18 g N gdw-¹) and the highest in soybean sole crop (1.27 g N gdw-¹), which suggests that the nitrification in the latter was occurring at faster rates than in intercrops, thus reducing emissions overall in intercrops. Greenhouse gas emissions were highly correlated to nitrifying genes indicating that the apparent source of emissions are promoted by nitrifying microbial functional genes. Although there is an evident linkage between N₂O emissions and microbial abundance, the microbial functionality needs to be further analyzed to confirm that the actual microbial source of N₂O emissions under nitrification conditions was of the nitrifying group. Moreover, isotopic measurements would elucidate the contribution of these greenhouse gases and would deliver a better understanding of the contribution of both C and N in CO₂ and N₂O emissions. In order to assess intercrop systems in terms of C storage and CO₂ reduction, long-term studies are needed (e.g., more than 10 years). Nonetheless, this study evidenced that intercropping systems are effectively reducing N₂O emissions and that have the potential to sustainably abate one of the most potent greenhouse gases that contribute to climate change.