Constitutive and Fracture Characterization of an Anisotropic and Asymmetric Alloy Sheet 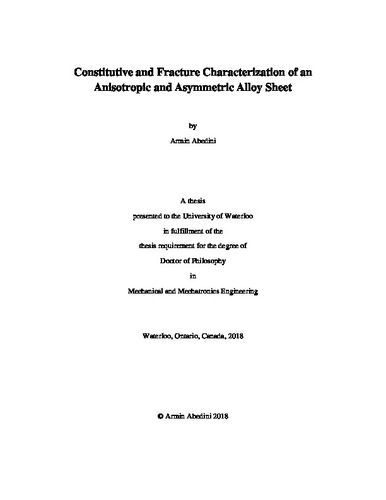 Magnesium alloys can offer significant weight reduction over conventional steel or aluminum alloys. Specifically, rare-earth alloyed magnesium sheets have the potential to be used as light-weight structural alloys since they possess a weakened crystallographic texture that leads to superior ductility over conventional magnesium alloys. However, there are some complications that limit wide-spread adoption of these alloys that are mainly attributed to their significant anisotropy and complex yielding behaviour, as well as their limited ductility (relative to cubic materials) and their orientation-dependent fracture response. The present thesis aims to address some of these challenges to support the commercial implementation of these alloys. Examining ZEK100-O rare-earth magnesium rolled sheet as a model material, the constitutive plastic and fracture behaviour of the alloy were characterized to reveal the response of the material under different quasi-static loading conditions at room temperature. Given the complex yielding behaviour of the material, a continuum-based plasticity model has been developed that captures evolving anisotropy and tension-compression asymmetry of ZEK100-O. The modelling framework consists of the CPB06 yield criterion for hcp materials along with a non-associative flow rule in which the yield function and plastic potential were calibrated for a range of plastic deformation levels along with an interpolation approach to account for evolving anisotropy under proportional loading conditions. The constitutive model has been implemented as a user material subroutine (UMAT) into the commercial finite element code, LS-DYNA, for general 3-D stress states. It is shown that predictions of the model were in good agreement with experimental data in terms of both global load-displacement as well as and local strain responses. In addition to a remarkable anisotropy and symmetry in the plastic response of the material, fracture experiments in different test orientations revealed that the fracture behaviour of the material is also anisotropic. However, orientation-dependency in fracture is not as significant as anisotropy in plastic response. In order to visualize directional dependency of the fracture response of the magnesium alloy, experimental fracture loci for different orientations were constructed. Furthermore, non-proportional tests were performed incorporating abrupt changes in stress state to study the role of the loading history on fracture behaviour of the alloy. It is shown that simple damage indicators might not be able to capture accurately fracture response of the material under severe changes in the stress states.