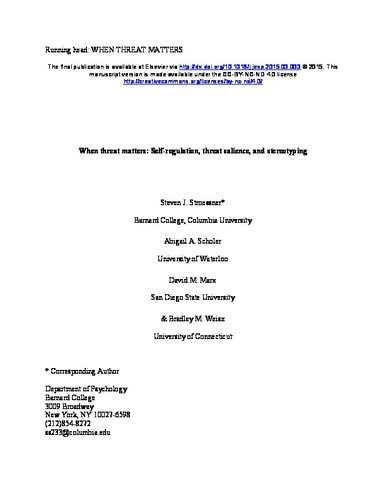 Four experiments examined whether information implying imminent threat to safety would interact with regulatory focus (Higgins, 1997) to affect the utilization of threat-relevant stereotypes. Because information suggesting imminent danger is more relevant to the safety goals of prevention-focused individuals than the advancement goals of promotion-focused individuals, utilization of threat-relevant stereotypes was expected to increase under such conditions only under prevention focus. Support for this prediction was obtained in four distinct and socially important domains. Using scenarios describing a violent crime committed by an African-American male (Experiment 1) or a petty crime committed by an undocumented immigrant (Experiment 2), prevention-focused individuals made judgments consistent with stereotypes when threat was perceived to be high rather than low. In studies that manipulated the stereotypicality of the target in a terrorism scenario (Experiments 3 & 4), prevention-focused individuals were more likely to endorse scrutinizing a stereotypical compared with a non-stereotypical target when terrorism was described as an increasing problem. Implications for models of stereotyping, self-regulation, and responding to threat are discussed.