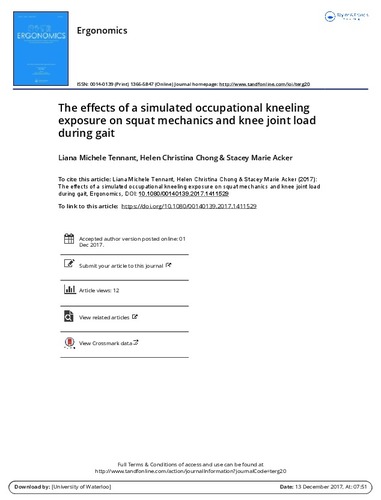 Occupational kneeling is associated with an increased risk for tibiofemoral knee osteoarthritis. Forces on the knee in the kneeling posture, as well as the greater incidence of meniscus tears among workers, likely contribute to the increased risk. We hypothesise that an additional mechanism may contribute – altered neuromuscular control due to prolonged high knee flexion. Forty participants (20 male, 20 female) completed an evaluation of gait and squatting before, immediately following, and 30 min following a 30 min simulated occupational kneeling exposure. An increase in the peak external knee adduction moment and a delay in vastus medialis activation onset during walking were observed post-kneeling, as well as increased frontal plane knee motion during squatting. This was the first investigation to find changes in high flexion transitions as a result of kneeling. Greater frontal plane knee motion may increase the risk for meniscal tears, and subsequently, knee osteoarthritis.Practitioner Summary: A 30 min simulated occupational kneeling exposure resulted in small but significant gait changes. The greatest effect was on frontal plane knee movement during squatting, which is especially relevant to occupations requiring frequent kneeling/squatting. This increased motion may indicate an increased risk of injury, which supports a link to knee osteoarthritis.