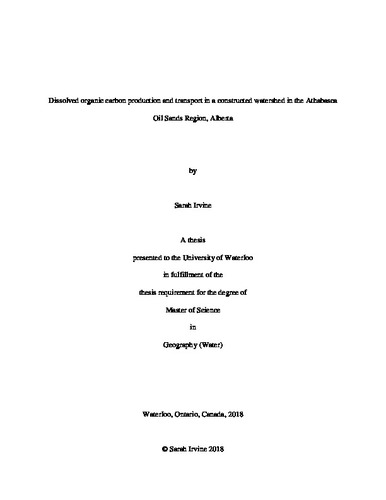 Within the Western Boreal Plains, a significant amount of surface cover has been removed through open-pit oil sands mining activities, which includes fen peatlands. Fen construction has been performed on the post-oil sands mined landscape, with the goal of returning ecohydrologic function such that the fen may become a carbon sink. Early results from studies within the Nikanotee Fen watershed indicate that groundwater is directed from the upland towards the fen, which has become a carbon sink. Work within the carbon budget includes dissolved organic carbon (DOC), and early post-succession concentrations and quality have been compared to natural analogues within the region. It was determined that initial conditions do not resemble that of reference sites; DOC concentrations were lower at the constructed site, and DOC appeared large and aromatic. However, DOC quantity and quality may shift as vegetation becomes established on the fen. However, no work has been done to determine the importance of other DOC sources in relation to both DOC dynamics within the fen, and how all DOC sources interact to affect DOC export quantity and quality. DOC export is typically highest in wetland-dominated watersheds, and can have important impacts on nutrient cycling, metal mobility, acidity, and availability of organics downstream. Therefore, it is important to ascertain if vegetation has become an important DOC source, and to consider hydrologic sources of DOC as well. This will be important when determining the best strategies for fen integration into a larger landscape. For this research, DOC concentration, flux, and quality was assessed through all sources within the watershed, to determine the relative importance of each input for determining DOC export from the site. DOC concentration and quality within the fen was then compared to reference sites, to assess the evolution of DOC sources post-construction. Water sampling occurred from May-August, 2015 in and July-August in 2016. It was determined that hydrological fluxes represented minimal inputs to the fen compared to the net production from vegetation, specifically as root exudates. However, when compared to reference sites, the constructed fen displayed less variability in its sources of DOC, whereas natural analogues displayed characteristics of both vegetation and microbially-sourced DOC. This is unlikely to change until mosses become dominant on site, or peat accumulation occurs. When considering all hydrological sources of DOC, groundwater represented the largest in 2015, while precipitation was the largest input in 2016. DOC concentration from each input did not significantly vary seasonally or by event size, therefore DOC fluxes were dependent on the volume of water mobilised. Yet, DOC quality varied substantially between sources. Both 2015 and early 2016 received less than average precipitation, this limited groundwater recharge and runoff in 2015. In wetter years, hydrologic inputs would increase, however will still be considerably less than the net production within the fen. This is evident when analyzing DOC quality at the outflow; DOC quality most resembled that in the fen. Total DOC export was limited, due to dry conditions. As DOC export only occurs through surface flow, dry conditions limited surface runoff within the fen, also promoting DOC accumulation. It is unlikely that hydrologic inputs will increase enough to represent a significant portion of the DOC budget in the fen even in wet years, therefore when the outflow is situated adjacent to the fen, monitoring should be most intensive within the fen. However, in constructed watersheds that do not contain wetlands, it will be important to monitor each contributing area to determine which areas within the watershed represent important DOC fluxes downstream, and how the DOC quality from each source may impact downstream biogeochemical dynamics.