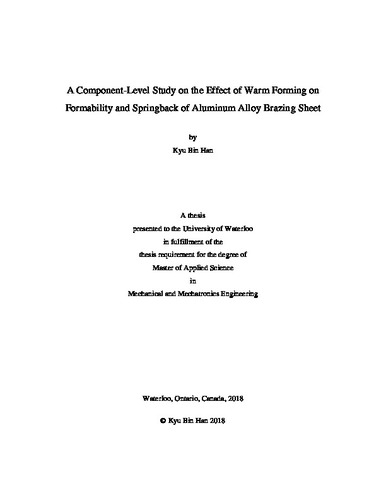 This thesis investigates the effect of warm forming (up to 350⁰C) on the formability and springback behavior of AA3003/AA4045 brazing sheet (0.2 mm gauge) for three temper conditions: O-, H22- and H24-tempers. The geometry under study is referred as a surrogate heat-exchanger component (SHC) and contains complex features found on commercial automotive thermal management systems. The hardening behavior of the material was modeled with the well-known extended Nadai phenomenological model, which captured the thermal softening, strain rate sensitivity and negative hardening behavior at elevated temperatures. Tensile simulations were performed and compared to the experimental results, demonstrating good agreement. Four tooling configurations that consider different die designs, blank geometries, and forming method were developed to improve the formability and wrinkling behavior associated with the aggressive geometries found in the SHC. Finite element models were used to predict the results of the tooling configurations in the development process. The tooling configuration with the best formability, wrinkling behavior and process efficiency was selected. Formability improvement was not clearly observed with the warm forming process. However, preliminary observations show that the reduction in springback using warm forming was very effective. With the selected tooling configuration, more in-depth springback characterization was completed for a wide range of forming process parameters such as: temperature, punch load, sheet direction, and holding time. At room temperature, H22- and H24-tempers exhibited significantly higher springback compared to O-temper, which can be attributed to the higher strength of the harder tempers. The effect of warm forming on springback was negligible for the O-temper but significant for harder tempers. For H24, a springback reduction up to 88% was observed at 325⁰C relative to room temperature at high punch load condition. Numerical simulations were performed to predict the springback and were compared to the experiments. The simulations considered several different factors that affect springback behavior such as through-thickness compression, thermal expansion and bi-metallic strength gradient. The simulation results qualitatively captured the effect of temperature on springback in the experiments with moderate quantitative agreement. The largest discrepancy was associated with an inability of the model to accurately predict the effect of punch load on springback. Overall, this study has served to characterize warm forming technology for a potential commercial application in the automotive heat exchanger industry. It was shown that the warm forming process did not offer significant benefit in terms of formability and wrinkling behavior; tooling optimization was more effective for formability and wrinkle control. However, warm forming was very beneficial in reducing springback, thus adoption of this technology should be very useful in applications where part dimensional accuracy is critical.

Kyu Bin Han (2018). A Component-Level Study on the Effect of Warm Forming on Formability and Springback of Aluminum Alloy Brazing Sheet. UWSpace. http://hdl.handle.net/10012/12937