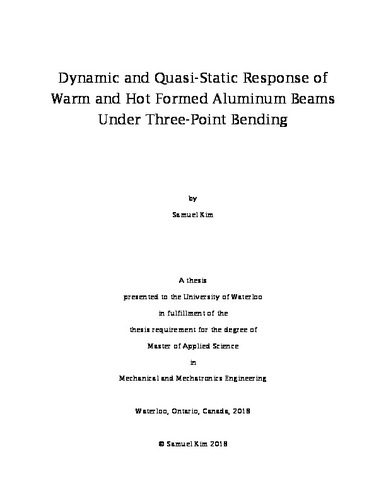 This thesis investigates the effect of elevated temperature forming on the impact resistance of three aluminum alloys, AA6013-T6, AA7075-T6, and a developmental 7000-series alloy (designated AA7xxx-T76). Both die quenching and warm forming processes were considered to investigate their potential to form high strength structural components for automotive applications. The die quenching process simultaneously forms and quenches the material from a solutionized condition to a supersaturated solid state solution (SSSS) after which aging treatments are applied to reach final strength. The warm forming process forms the material below the solutionization temperature. In this work, the 7000-series aluminum alloys were die quenched and brought back to their original tempers with standard T6 or T76 aging treatments as well as experimental aging schedules (denoted with the letters “IPB” after the emulated temper designation) designed to incorporate the automotive paint bake cycle (177°C for 30 minutes). The IPB aging treatments reduce the aging time by 65-78% depending on alloy composition. After aging, the die quenched beams exhibited a Vickers hardness of 180 HV for AA7075-T6, 179 HV for AA7075-T6IPB, 166 HV AA7xxx-T76, and 166 HV for AA7xxx-T76IPB. The three aluminum alloys were also warm formed under isothermal (blank and tooling heated to the same temperature) and non-isothermal (heated blank and room temperature tooling) conditions at 200°C and 233°C. The non-isothermal warm forming process resulted in a higher peak strength compared to the isothermal warm forming process for all alloys, but AA7075 was more susceptible to cracking when non-isothermally formed. In addition, under aged AA6013 and AA7xxx blanks were warm formed and then subjected to a paint bake cycle. This processing route makes use of the thermal energy from the forming process and paint bake cycle to complete aging and increase the strength of the beams. The final result was a part that is at a near peak aged (T6 temper) condition. Additional optimization of the under-aged temper is necessary to further balance formability and peak strength. All beams were then subjected to quasi-static three-point bend experiments, while the die quenched beams were also subjected to additional dynamic three-point bend tests. All warm formed material followed the same trend in which the non-isothermally formed beams had a 6-19.5% increase in force over a standard T6 condition, but had a higher tendency to fracture than their isothermally formed counterparts depending on alloy composition. The beams that were formed at the lower isothermal temperature had a 1.4-9.4% lower peak force but had similar fracture characteristics as the beams formed at a higher isothermal temperature. The peak force for the die quenched IPB and standard heat treatment scheduled beams were within 0-6% depending on the aluminum alloy composition. Both the IPB and standard heat treatment T6 or T76 beams exhibited the same fracture pattern. Numerical models were developed using LS-DYNA to simulate the forming and subsequent three-point bend response of the die quenched beams. The models predicted the peak force to within 4% of the measured data.