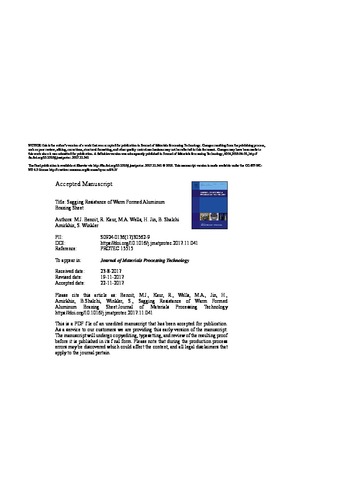 Interrupted tensile tests, performed between room temperature (RT) and 250°C, were used to simulate warm forming of an AA3003/AA4045 brazing sheet. Brazing performance was predicted from sagging distance measurements after a thermal cycle. The sagging distance as a function of strain for sheets strained at 150°C was similar to that of RT strained samples, while the sagging distances were larger at all levels of applied strain for sheets strained at 200°C and 250°C. Large sagging distances were correlated with the occurrence of liquid film migration during simulated brazing and a recovered substructure in the core alloy, while small sagging distances were associated with a coarse, recrystallized core alloy. The poor brazing performance of sheets formed above 150°C was attributed to a reduction in the stored strain energy during forming, resulting in recovery rather than recrystallization during brazing, leaving a microstructure which is susceptible to liquid film migration.