The risk of fragility fractures in new users of dipeptidyl peptidase-4 inhibitors compared to sulfonylureas and other anti-diabetic drugs: A cohort study 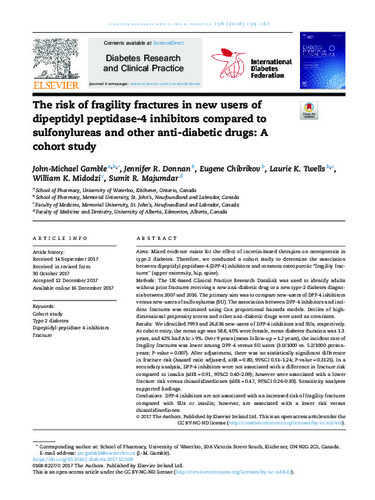 Aims Mixed evidence exists for the effect of incretin-based therapies on osteoporosis in type-2 diabetes. Therefore, we conducted a cohort study to determine the association between dipeptidyl peptidase-4 (DPP-4) inhibitors and common osteoporotic “fragility fractures” (upper extremity, hip, spine).Methods The UK-based Clinical Practice Research Datalink was used to identify adults without prior fractures receiving a new anti-diabetic drug or a new type-2 diabetes diagnosis between 2007 and 2016. The primary aim was to compare new-users of DPP-4 inhibitors versus new-users of sulfonylureas (SU). The association between DPP-4 inhibitors and incident fractures was estimated using Cox proportional hazards models. Deciles of high-dimensional propensity scores and other anti-diabetic drugs were used as covariates. Results We identified 7993 and 26,636 new-users of DPP-4 inhibitors and SUs, respectively. At cohort entry, the mean age was 58.8, 40% were female, mean diabetes duration was 1.3 years, and 42% had A1c > 9%. Over 9 years (mean follow-up = 1.2 years), the incident rate of fragility fractures was lower among DPP-4 versus SU users (3.0/1000 vs. 5.2/1000 person-years; P-value = 0.007). After adjustment, there was no statistically significant difference in fracture risk (hazard ratio adjusted, aHR = 0.80, 95%CI 0.51–1.24; P-value = 0.3125). In a secondary analysis, DPP-4 inhibitors were not associated with a difference in fracture risk compared to insulin (aHR = 0.91, 95%CI 0.40–2.09); however were associated with a lower fracture risk versus thiazolidinediones (aHR = 0.47, 95%CI 0.26–0.83). Sensitivity analyses supported findings. Conclusions DPP-4 inhibitors are not associated with an increased risk of fragility fractures compared with SUs or insulin; however, are associated with a lower risk versus thiazolidinediones.