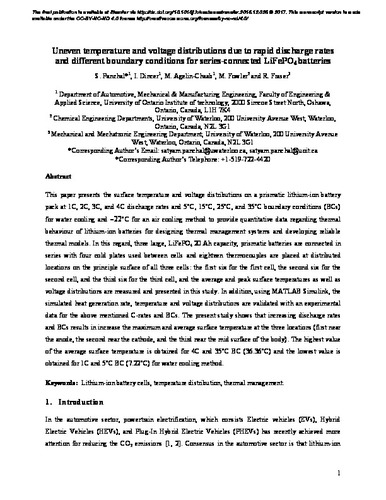 This paper presents the surface temperature and voltage distributions on a prismatic lithium-ion battery pack at 1C, 2C, 3C, and 4C discharge rates and 5°C, 15°C, 25°C, and 35°C boundary conditions (BCs) for water cooling and ~22°C for air cooling methods. It provides quantitative data regarding thermal behaviour of lithium-ion batteries for designing thermal management systems and developing reliable thermal models. In this regard, three large LiFePO4 20Ah capacity, prismatic batteries are connected in series with four cold plates used between cells and eighteen thermocouples are placed at distributed locations on the principle surface of all three cells: the first six for the first cell, the second six for the second cell, and the third six for the third cell, and the average and peak surface temperatures as well as voltage distributions are measured and presented in this study. In addition, the simulated heat generation rate, temperature and voltage distributions are validated with an experimental data for the above mentioned C-rates and BCs. The present study shows that increasing discharge rates and BCs results in increase in the maximum and average surface temperatures at the three locations (near the anode, cathode, and mid surface of the body). The highest value of the average surface temperature is obtained for 4C and 35°C BC (36.36°C) and the lowest value is obtained for 1C and 5°C BC (7.22°C) for water cooling method.