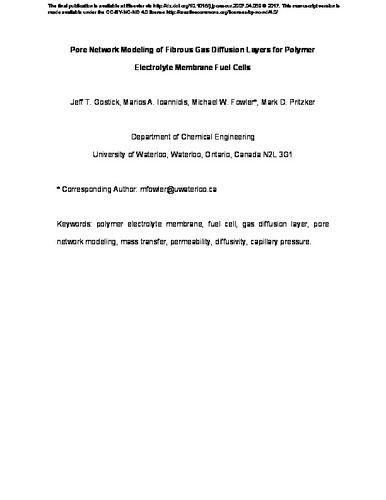 A pore network model of the gas diffusion layer (GDL) in a polymer electrolyte membrane fuel cell is developed and validated. The model idealizes the GDL as a regular cubic network of pore bodies and pore throats following respective size distributions. Geometric parameters of the pore network model are calibrated with respect to porosimetry and gas permeability measurements for two common GDL materials and the model is subsequently used to compute the pore-scale distribution of water and gas under drainage conditions using an invasion percolation algorithm. From this information, the relative permeability of water and gas and the effective gas diffusivity are computed as functions of water saturation using resistor-network theory. Comparison of the model predictions with those obtained from constitutive relationships commonly used in current PEMFC models indicates that the latter may significantly overestimate the gas phase transport properties. Alternative relationships are suggested that better match the pore network model results. The pore network model is also used to calculate the limiting current in a PEMFC under operating conditions for which transport through the GDL dominates mass transfer resistance. The results suggest that a dry GDL does not limit the performance of a PEMFC, but it may become a significant source of concentration polarization as the GDL becomes increasingly saturated with water.