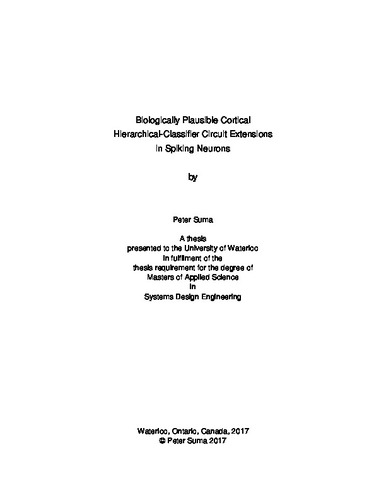 Hierarchical categorization inter-leaved with sequence recognition of incoming stimuli in the mammalian brain is theorized to be performed by circuits composed of the thalamus and the six-layer cortex. Using these circuits, the cortex is thought to learn a ‘brain grammar’ composed of recursive sequences of categories. A thalamo-cortical, hierarchical classification and sequence learning “Core” circuit implemented as a linear matrix simulation and was published by Rodriguez, Whitson & Granger in 2004. In the brain, these functions are implemented by cortical and thalamic circuits composed of recurrently-connected, spiking neurons. The Neural Engineering Framework (NEF) (Eliasmith & Anderson, 2003) allows for the construction of large-scale biologically plausible neural networks. Existing NEF models of the basal-ganglia and the thalamus exist but to the best of our knowledge there does not exist an integrated, spiking-neuron, cortical-thalamic-Core network model. We construct a more biologically-plausible version of the hierarchical-classification function of the Core circuit using leaky-integrate-and-fire neurons which performs progressive visual classification of static image sequences relying on the neural activity levels to trigger the progressive classification of the stimulus. We proceed by implementing a recurrent NEF model of the cortical-thalamic Core circuit and then test the resulting model on the hierarchical categorization of images.