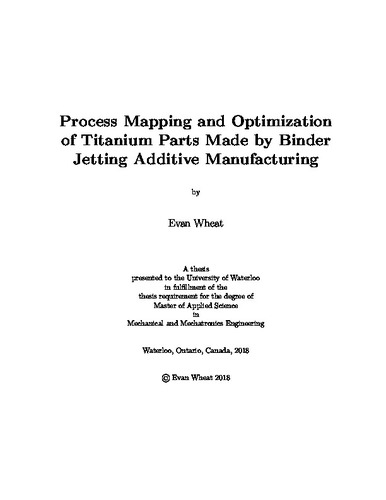 Additive manufacturing (AM) has recently seen an increase in adoption outside of its traditional role of rapid prototyping and is being used more and more for the production of functional components. The increased adoption is due in part to better systems and a better understanding of the AM process. Binder jetting additive manufacturing (BJAM), however, has seen significantly less adoption compared to other AM technologies and that is likely because there has been comparatively less work done on improving and understanding the process. For BJAM to see more widespread use, a more thorough understanding of the process both during printing and sintering is required. One area where BJAM can see more substantive adoption is in the medical and dental fields. Porous parts, especially implants, can have highly beneficial properties compared to solid parts. However, the porosity in these components needs to be tailored depending on the application. BJAM allows for this level of control, as the density of sintered parts can be controlled anywhere from around 50% to nearly 100%. Tailoring these properties requires controlling the density of the green parts (through printing) and subsequently the final parts (through sintering), as many part properties are directly linked to density. Previous studies in the group focused on the printing of commercially pure titanium components. This thesis adds onto that work by examining the effects of powder sizes and sintering on green and final densities. Five sample types were produced to evaluate the sintering process. The powder size distribution was varied between samples while the printing parameters were kept fixed. This was done in order to isolate the effects of the powder size distribution from the printing parameters. Two mono-modal distributions were used (45-106µm and 106-150µm) as well as three bi-modal distributions (0-45µm/45-106µm, 0-45µm/106-150µm and 45-106µm/106-150µm). The completed work focuses on two main areas. The first area is more traditional sinter theory and sinter structure analysis, which is done to gain insight into how different particle sizes and the specific powder systems seen in BJAM parts affects the sintering process. This analysis is done using computed tomography (CT), where both the green and sintered parts are scanned and compared. Four major features are evaluated from the CT scans, which are bulk porosity, porosity per layer, particle size and pore size. Parts are sintered at 1000°C and 1400°C to produce parts that undergo only non-densifying and densifying sintering respectively. From the results, it was found that samples with the fine powder additions (0-45µm) sintered with substantially higher levels of densification (at both 1000°C and 1400°C) compared to the other powder types comprised of larger particles. All of the samples showed a periodic density change corresponding to the height of the printed layers. Parts were found to be the most dense within a layer and least dense at the layer interfaces. After sintering, the relative density variation was unchanged for samples with larger particles and exacerbated for samples made with finer particles. Samples with the finer particles were able to achieve bulk densities of 82.7% and 84.6% when sintered at 1400°C. However, the density fluctuated from nearly 100% within layers to approximately 60% at the layer interfaces. The second area of focus is on the development of a tool to predict the final density of sintered parts. The development of this tool drew heavily from existing information on the sintering of powder metallurgy components. From a literature review, the master sinter curve (MSC), a powder metallurgy technique based on the combined stage sinter theory, was deemed to be an excellent basis for developing a predictive tool. The MSC is constructed using experimental dilatometry results, avoiding the need for a more comprehensive analysis of the powders used. To generate MSCs for each powder type, samples were sintered in a dilatometer from room temperature up to 1550°C at various heating rates and then cooled quickly. The dilatometry results are then processed to create MSCs. Reliable MSCs could not be made from the dilatometry results. The specific push-rod dilatometry analysis that was used as part of this work (required due to the system configuration) gave poor shrinkage results. These results could not be used to make good quality MSCs and prevented the generation of the predictive tool. However, since the general process has already been made as part of this work, only new dilatometry measurements are required to be able to create proper MSCs.