Implications of Marine Protected Areas on Social-Ecological Wellbeing in the Bay of Fundy, Canada 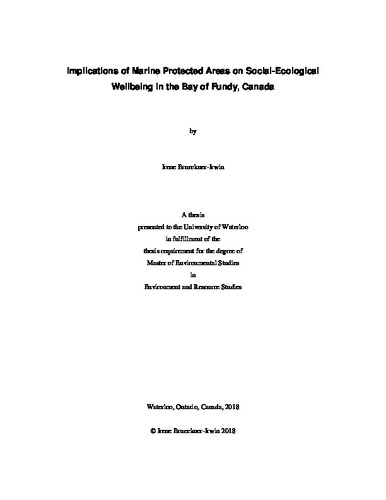 Globally, marine protected areas (MPAs) are proliferating to meet Aichi Target 11 under the Convention on Biological Diversity – to protect 10% of coastal and marine areas by 2020. MPAs hold promise to enhance the ecological integrity of the oceans, but their social implications require closer examination. MPAs create a range of benefits and costs that are distributed differentially across stakeholders, including coastal communities that depend on marine resources. Support from these communities is critical to enhance the effectiveness of MPAs. This research develops and applies a social-ecological wellbeing perspective to examine the relationship between MPAs and the wellbeing of an inshore fishing community in the Bay of Fundy, Canada. Specifically, this research addresses the following three objectives: (1) understand stakeholder perceptions of MPAs in relation to social-ecological wellbeing; (2) examine how the social and ecological benefits and costs of MPAs are distributed across two cases, and across stakeholders; and (3) generate social-ecological wellbeing insights to contribute to the effectiveness of MPA governance. This research applies an inductive qualitative case study approach to the coastal region of Southwest New Brunswick. Within this region, two cases were examined: (1) the Musquash Estuary MPA, which was designated in 2006, and (2), the Outer Quoddy Ecologically and Biologically Significant Area, which is on a longlist of areas that may become an MPA in the future. Research methods included a literature review, observations, 49 semi-structured interviews, and four visioning focus groups. Participants included 27 fishers and 22 other non-fisher informants. Key findings from this research first reveal that 15 attributes of wellbeing were perceived to be influenced by MPAs, across material, relational, subjective, and ecological dimensions. At both locations, the most-referenced attributes were collaborative decision-making and fishery access, suggesting that these particular issues were most significant to participants. Second, attributes were more commonly perceived as benefits at the Musquash MPA, whereas they were generally perceived as costs to fishers at Outer Quoddy. The disparity between cases demonstrates that despite the historical precedent of a relatively low-impact MPA at Musquash, there is still apprehension in the region about potential future MPAs. Apprehension was largely attributed to the current top-down government mandate driving MPA network development in Canada. Third, in order to be more effective, MPA governance must address the potential displacement of fishers as a result of MPAs, improve the decision-making approach for MPA network planning, and enhance the social and ecological fit between MPAs and the local context of the region. These governance implications may be better addressed using a model of co-management, which would recognize the role of the central government in decision-making, while giving fishers more authority to plan locally relevant and meaningful conservation initiatives. Major contributions of this research include the development and application of a social-ecological wellbeing framework, as well as governance insights to enhance MPA effectiveness. Ultimately, this research has revealed a complex and context-dependent relationship between MPAs and the wellbeing of the inshore fishing community in Southwest New Brunswick. Given the current momentum behind MPAs, an opportunity exists to develop marine conservation strategies that align with local priorities and contribute to the conservation of biodiversity in the Bay of Fundy.