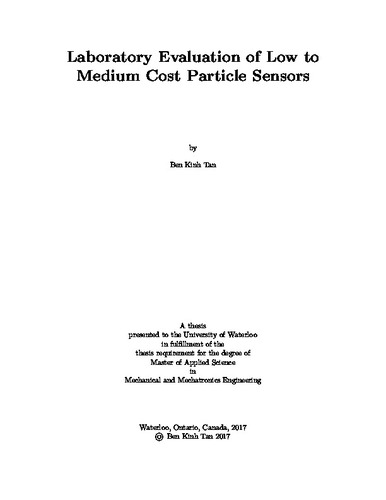 Low cost instruments for particulate matter monitoring directly benefits researchers, governments, and public with the overall goal of reducing the adverse effects of air pollution. As a result, companies have been rushing to produce such products. While laser light scattering is a low cost method, the technique suffers from drawbacks with accuracy. The performance of sensors on the market are questionable as few have been scientifically analyzed and the public lacks the technical means of verifying accuracy themselves. Thus, the objective of this research was to validate the performance of commercial laser light scattering based particle sensors. To accomplish this, eight were evaluated against a reference instrument and the relationship was modeled. Afterwards, a custom apparatus with improved calibration was developed for particulate monitoring. The eight commercial sensors evaluated demonstrated high linearity with the reference instrument, but poor estimations of actual particulate concentrations. The performance of the sensors was strongly dependent on particle composition and size. Statistical analysis was also completed to compare linear parametric models used to calibrate the sensors with the non-parametric model. Results show that the linear models were frequently biased and therefore higher order polynomials should be used. The custom apparatus was further evaluated with several laboratory particle sources as well as in real environments. Results show a low dependence on aerosol composition with higher flow rates. The instrument was calibrated to provide an "average" response for the tested particles. Models were developed for PM10 and PM2.5 number and mass concentration measurements. The 95% prediction interval for PM10 and PM2.5 number concentration was +/-350 and +/-360 particles/cm3, respectively. For PM10 and PM2.5 mass concentration, the intervals were +/-75 and +/-45 μg/m3, respectively.