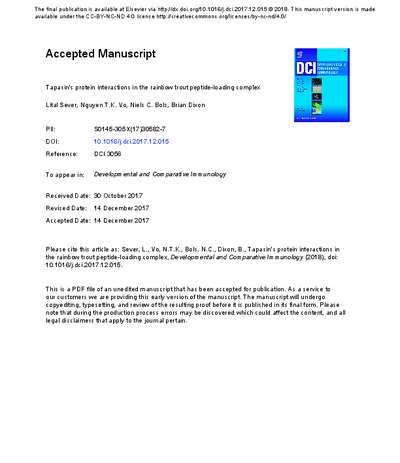 Major histocompatibility complex (MHC) class I receptors play a key role in the immune system by presenting non-self peptides to T cell lymphocytes. In humans, the assembly of the MHC class I with a peptide is mediated by machinery in the endoplasmic reticulum referred as the peptide loading complex (PLC). Although, the identity of the PLC has been widely explored in humans, this complex has not been characterized in fish. Co-immunoprecipitation and mass spectrometry analysis revealed that the protein-protein interactions which exist in the human PLC are conserved in the monocyte/macrophage rainbow trout cell line (RTS11), in particular the interaction of tapasin with the transporter associated with antigen processing (TAP), MHC class I and ERp57. Importantly, a 20 kDa tapasin version that contains an intact C and N terminal domains was found to associate with ERp57 and form a 75 kDa heterodimer. These results suggest a possible novel alternative spliced version of tapasin may regulate the formation of the peptide-loading complex in teleosts.