The Labour Market Integration of Immigration and Their Role on Innovation 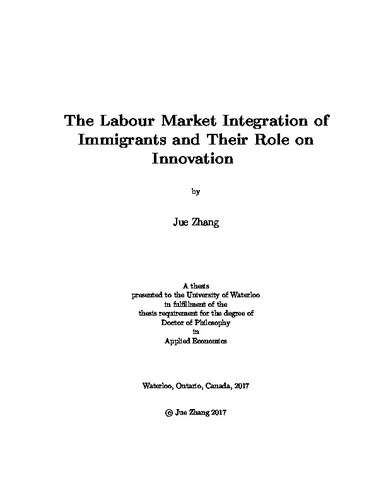 This thesis contains three chapters evaluating the role of labour market skills in determining immigrants' labour market integration and Canada's innovation rate. In Chapter 1, I estimate how the impact of entry economic conditions on immigrants' labour market outcomes varies by the versatility of their skills. Skill versatility is measured using information on the sectoral concentration of native-born workers with a particular education field and level. Entry economic conditions are measured using city-level unemployment rates among native graduates from a similar education field and level. Since immigrants' location choices can be endogenous to geographic local economic conditions, I address the endogeneity of immigrants' location choices by exploiting the historical settlement patterns of immigrants from the same countries of origin. I find that immigrants suffer a 5 to 8 percent decline in their annual earnings when there is a one percentage-point increase in entry unemployment rates. When I incorporate the skill versatility measure in the estimation, the earnings loss is mitigated by 1 to 3 percentage points, if there is a one standard deviation increase in immigrants' skill versatility level. This effect is less evident for highly educated immigrants and it may be due to their being more likely to have pre-arranged employment before landing. I also find that city-level onward migration is more likely for immigrants who face unfavourable labour market conditions at entry, and movers do fare better than stayers conditional on initial setbacks. Meanwhile, immigrants' geographical mobility is found to be strengthened to some extent by their skill versatility. Chapter 2 examines the effect of changes in skilled-immigrant population shares in 98 Canadian cities between 1981 and 2006 on per capita patents. The Canadian case is of interest because its `points system' for selecting immigrants is viewed as a model of skilled immigration policy. Our estimates suggest unambiguously smaller beneficial impacts of increasing the university-educated immigrant population share than comparable U.S. estimates, whereas our estimates of the contribution of Canadian-born university graduates are virtually identical in magnitude to the U.S. estimates. The modest contribution of Canadian immigrants to innovation is, in large part, explained by the low employment rates of Canadian STEM-educated immigrants in STEM jobs. Our results point to the value of providing employers with a role in the immigrant screening process. Lastly, in Chapter 3, using inventors' names to identify their ethnicity and Canadian Census and NHS data to estimate ethnic populations, we estimate patenting rates for Canada's ethnic populations between 1986 and 2011. The results reveal higher patenting rates for Canada's ethnic minorities, particularly for Canadians with Korean, Japanese, and Chinese ancestry, and suggest that immigrants accounted for one-third of Canadian patents in recent years, despite comprising less than one-quarter of the adult population. Human capital characteristics, in particular the share with a PhD and the shares educated and employed in STEM fields, account for most of the ethnic-minority advantage in patenting. Our results also point to larger patenting contributions by foreign-educated compared to Canadian-educated immigrants, which runs counter to current immigrant selection policies favouring international students.