Cooperative Manipulation using a Magnetically Navigated Microrobot and a Micromanipulator 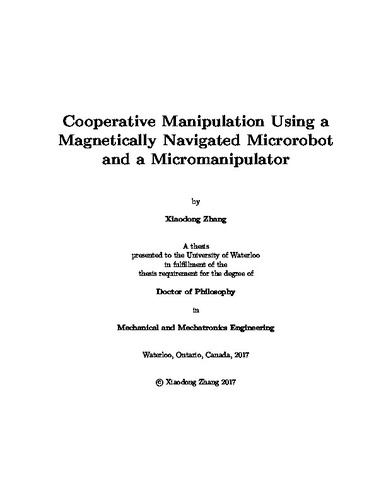 The cooperative manipulation of a common object using two or more manipulators is a popular research field in both industry and institutions. Different types of manipulators are used in cooperative manipulation for carrying heavy loads and delicate operations. Their applications range from macro to micro. In this thesis, we are interested in the development of a novel cooperative manipulator for manipulation tasks in a small workspace. The resultant cooperative manipulation system consists of a magnetically navigated microrobot (MNM) and a motorized micromanipulator (MM). The MNM is a small cylinder permanent magnet with 10mm diameter and 10mm height. The MM model is MP-285 which is a commercialized product. Here, the MNM is remotely controlled by an external magnetic field. The property of non-contact manipulation makes it a suitable choice for manipulation in a confined space. The cooperative manipulation system in this thesis used a master/slave mechanism as the central control strategy. The MM is the master side. The MNM is the slave side. During the manipulation process, the master manipulator MM is always position controlled, and it leads the object translation according to the kinematic constraints of the cooperative manipulation task. The MNM is position controlled at the beginning of the manipulation. In the translation stage, the MNM is switched to force control to maintain a successful holding of the object, and at the same time to prevent damaging the object by large holding force. Under the force control mode, the motion command to the MNM is calculated from a position-based impedance controller that enforces a relationship between the position of the MNM and the force. In this research, the accurate motion control of both manipulators are firstly studied before the cooperative manipulation is conducted. For the magnetic navigation system, the magnetic field in its workspace is modeled using an experimental measurement data-driven technique. The developed model is then used to develop a motion controller for navigating of a small cylindrical permanent magnet. The accuracy of motion control is reached at 20 µm in three degrees of freedom. For the motorized micromanipulator, a standard PID controller is designed to control its motion stage. The accuracy of the MM navigation is 0.8 µm. Since the MNM is remotely manipulated by an external magnetic field in a small space, it is challenging to install an on-board force sensor to measure the contact force between the MNM and the object. Therefore, a dual-axial o_-board force determination mechanism is proposed. The force is determined according to the linear relation between the minimum magnetic potential energy point and the real position of the MNM in the workspace. For convenience, the minimum magnetic potential energy point is defined as the Bmax in the literature. In this thesis, the dual-axial Bmax position is determined by measuring the magnetic ux density passing through the workspace using four Hall-effect sensors installed at the bottom of an iron pole-piece. The force model is experimentally validated in a horizontal plane with an accuracy of 2 µN in the x- and y- direction of horizontal planes. The proposed cooperative manipulator is then used to translate a hard-shell small object in two directions of a vertical plane, while one direction is constrained with a desired holding force. During the manipulation process, a digital camera is used to capture the real-time position of the MNM, the MM end-effector, and the manipulated object. To improve the performance of force control on the MNM, the proposed dual-axial force model is used to examine the compliant force control of the MNM while it is navigated to contact with uncertain environments. Here, uncertain refers to unknown environmental stiffness. An adaptive position-based impedance controller is implemented to estimate the stiffness of the environment and the contact force. The controller is examined by navigating the MNM to push a thin aluminum beam whose stiffness is unknown. The studied cooperative manipulation system has potential applications in biomedical microsurgery and microinjection. It should be clarified that the current system setup with 10mm ×10 mm MNM is not proper for this micromanipulation. In order to conduct research on microinjection, the size of the MNM and the end-effector of the MNM should be down-scaled to micrometers. In addition, the navigation accuracy of the MNM should also be improved to adopt the micromanipulation tasks.