Uranium isotope compositions of mid-Proterozoic black shales: Evidence for an episode of increased ocean oxygenation at 1.36Ga and evaluation of the effect of post-depositional hydrothermal fluid flow 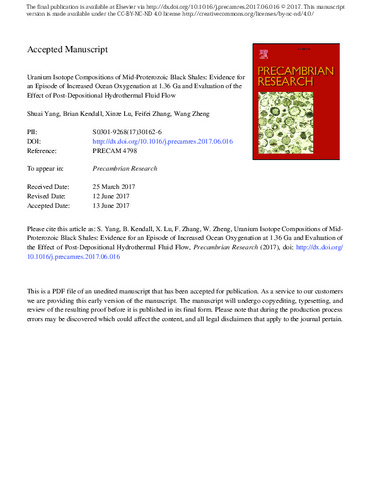 We report U isotope data for marine black shales of the early Mesoproterozoic Velkerri Formation (Roper Group) and late Paleoproterozoic Wollogorang Formation (Tawallah Group) from the McArthur Basin, Northern Australia. An average authigenic δ238U of 0.13±0.04‰ (1SD; relative to standard CRM145) was obtained for six U- and Mo-rich shales from a ∼1m interval that was deposited at 1361±21Ma (based on previous Re-Os geochronology). After correcting for a local U isotope fractionation of ∼0.60–0.85‰ associated with U removal to anoxic sediments, we infer that global seawater at 1.36Ga had a δ238U of ∼−0.47‰ to −0.72‰, which is ∼0.1−0.3‰ lighter than modern seawater (−0.39±0.01‰). Uranium isotope mass-balance modelling suggests that <25% of the seafloor was anoxic at 1.36Ga. This interpretation is consistent with high U and Mo enrichments in these samples compared with other Velkerri Formation and mid-Proterozoic black shales, which suggests a sizable dissolved oceanic Mo and U inventory developed in response to an episode of increased ocean oxygenation. Hence, a significant expanse of O2-bearing deep ocean waters may have existed at 1.36Ga. The O2 concentrations of those waters were not necessarily high given that a large expanse of weakly oxygenated deep waters is also consistent with the mass-balance model. A lower average authigenic δ238U of −0.08±0.18‰ (1SD) was obtained for comparatively U- and Mo-poor black shales from a ∼1m interval in the lower Velkerri Formation, deposited at 1417±29Ma. In contrast to the upper Velkerri interval, the mass-balance model permits widespread ocean anoxia during deposition of the lower Velkerri interval. Black shales of the ca. 1.73Ga Wollogorang Formation previously yielded an erroneously young Re-Os date of 1359±150Ma, likely due to post-depositional hydrothermal alteration at ca. 1640Ma. Higher δ238U is observed in samples closer to the base of the black shale unit where the greatest extent of open-system Re-Os behavior was observed. Hence, post-depositional hydrothermal fluid flow may overprint the depositional δ238U of black shales and cause erroneous estimates of ancient global ocean anoxia.