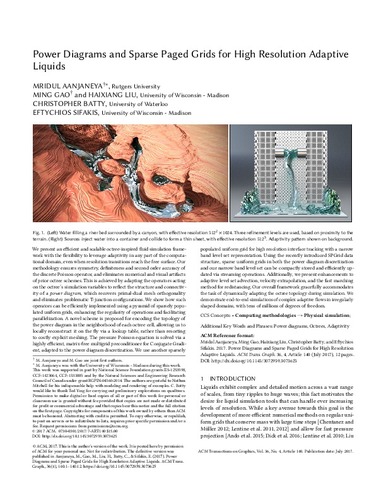 We present an efficient and scalable octree-inspired fluid simulation framework with the flexibility to leverage adaptivity in any part of the computational domain, even when resolution transitions reach the free surface. Our methodology ensures symmetry, definiteness and second order accuracy of the discrete Poisson operator, and eliminates numerical and visual artifacts of prior octree schemes. This is achieved by adapting the operators acting on the octree's simulation variables to reflect the structure and connectivity of a power diagram, which recovers primal-dual mesh orthogonality and eliminates problematic T-junction configurations. We show how such operators can be efficiently implemented using a pyramid of sparsely populated uniform grids, enhancing the regularity of operations and facilitating parallelization. A novel scheme is proposed for encoding the topology of the power diagram in the neighborhood of each octree cell, allowing us to locally reconstruct it on the fly via a lookup table, rather than resorting to costly explicit meshing. The pressure Poisson equation is solved via a highly efficient, matrix-free multigrid preconditioner for Conjugate Gradient, adapted to the power diagram discretization. We use another sparsely populated uniform grid for high resolution interface tracking with a narrow band level set representation. Using the recently introduced SPGrid data structure, sparse uniform grids in both the power diagram discretization and our narrow band level set can be compactly stored and efficiently updated via streaming operations. Additionally, we present enhancements to adaptive level set advection, velocity extrapolation, and the fast marching method for redistancing. Our overall framework gracefully accommodates the task of dynamically adapting the octree topology during simulation. We demonstrate end-to-end simulations of complex adaptive flows in irregularly shaped domains, with tens of millions of degrees of freedom.