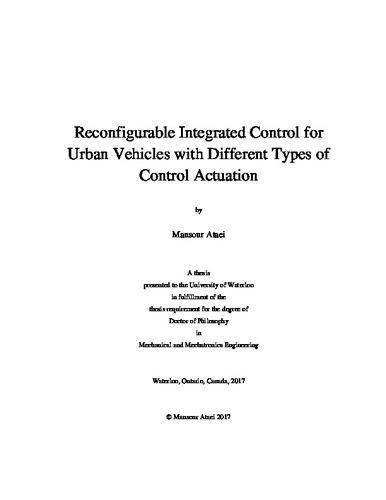 Urban vehicles are designed to deal with traffic problems, air pollution, energy consumption, and parking limitations in large cities. They are smaller and narrower than conventional vehicles, and thus more susceptible to rollover and stability issues. This thesis explores the unique dynamic behavior of narrow urban vehicles and different control actuation for vehicle stability to develop new reconfigurable and integrated control strategies for safe and reliable operations of urban vehicles. A novel reconfigurable vehicle model is introduced for the analysis and design of any urban vehicle configuration and also its stability control with any actuation arrangement. The proposed vehicle model provides modeling of four-wheeled (4W) vehicles and three- wheeled (3W) vehicles in Tadpole and Delta configurations in one set of equations. The vehicle model is also reconfigurable in the sense that different configurations of control actuation can be accommodated for controller design. To develop the reconfigurable vehicle model, two reconfiguration matrices are introduced; the corner and actuator reconfiguration matrices that are responsible for wheel and actuator configurations, respectively. Simulation results show that the proposed model properly matches the high-fidelity CarSim models for 3W and 4W vehicles. Rollover stability is particularly important for narrow urban vehicles. This thesis investigates the rollover stability of three-wheeled vehicles including the effects of road angles and road bumps. A new rollover index (RI) is introduced, which works for various road conditions including tripped and un-tripped rollovers on flat and sloped roads. The proposed RI is expressed in terms of measurable vehicle parameters and state variables. In addition to the effects of the lateral acceleration and roll angle, the proposed RI accounts for the effects of the longitudinal acceleration and the pitch angle, as well as the effects of road angles. Lateral and vertical road inputs are also considered since they can represent the effects of curbs, soft soil, and road bumps as the main causes of tripped rollovers. Sensitivity analysis is provided to evaluate and compare the effects of different vehicle parameters and state variables on rollover stability of 3W vehicles. A high-fidelity CarSim model for a 3W vehicle has been used for simulation and evaluation of the proposed RI accuracy. As a potentially useful mechanism for urban vehicles, wheel cambering is also investigated in this study to improve both lateral and rollover stability of narrow vehicles. A suspension system with active camber has an additional degree of freedom for changing the camber angle through which vehicle handling and stability can be improved. Conventionally, camber has been known for its ability to increase lateral forces. In this thesis, the benefits of cambering for rollover stability of narrow vehicles are also investigated and compared with a vehicle tilt mechanism. The simulation results indicate that active camber systems can improve vehicle lateral stability and rollover behavior. Furthermore, by utilizing more friction forces near the limits, the active camber system provides more improvement in maneuverability and lateral stability than the active front steering does. The proposed reconfigurable vehicle model leads us to the development of a general integrated reconfigurable control structure. The reconfigurable integrated controller can be used to meet different stability objectives of 4W and 3W vehicles with flexible combinations of control actuation. Employing the reconfigurable vehicle model, the proposed unified controller renders reconfigurability and can be easily adapted to Tadpole and Delta configurations of 3W as well as 4W vehicles without reformulating the problem. Different types and combinations of actuators can be selected for the control design including or combination of differential braking, torque vectoring, active front steering, active rear steering, and active camber system. The proposed structure provides integrated control of the main stability objectives including handling improvement, lateral stability, traction/braking control, and rollover prevention. The Model Predictive Control (MPC) approach is used to develop the reconfigurable controller. The performance of the introduced controller has been evaluated through CarSim simulations for different vehicles and control actuation configurations.