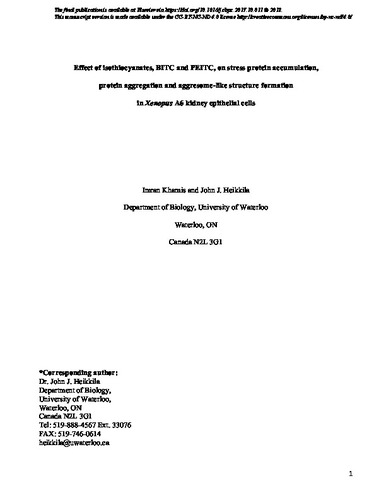 Numerous studies have elucidated the health benefits of organosulfur compounds, known as isothiocyanates (ITCs), derived from cruciferous vegetables. As electrophiles, ITCs have the ability to directly bind and modify thiol-containing compounds such as glutathione and cellular protein, including tubulin. While the biochemical effects of ITCs have been well characterized, less information is available regarding their effects on the accu- mulation of stress-inducible heme oxygenase-1 (HO-1), heat shock proteins (HSPs) and the possible formation of aggregated protein due to thiol modification. The present study has examined the effect of the ITCs, benzyl isothiocyanate (BITC) and phenethyl isothiocyanate (PEITC), on the accumulation of HO-1, HSP70 and HSP30 in Xenopus laevis A6 kidney epithelial cells. Immunoblot analysis revealed that both BITC and PEITC induced the accumulation of HO-1 and HSP70 whereas HSP30 levels were enhanced only in cells treated with BITC. Immunocytochemistry determined that ITC treatment induced F-actin disorganization and membrane ruffling and enhanced accumulation of HO-1 in the cytoplasm. Additionally, BITC induced enhanced levels of ubiqui- tinated protein, aggregated protein, and the collapse and fragmentation of microtubules. In comparison, treat- ment of cells with the proteasomal inhibitor, MG132, induced the accumulation of all three stress proteins, aggregated protein and aggresome-like structures. Finally, cells pretreated with BITC inhibited the formation of MG132-induced aggresome-like structures in the perinuclear region. This latter finding suggests that BITC-in- duced microtubule fragmentation may impede the movement of aggregated protein via microtubules and their subsequent coalescence into aggresome-like structures in the perinuclear region.