Study of a MEMS fiber-optic pressure sensor based on Optical Interferometry. 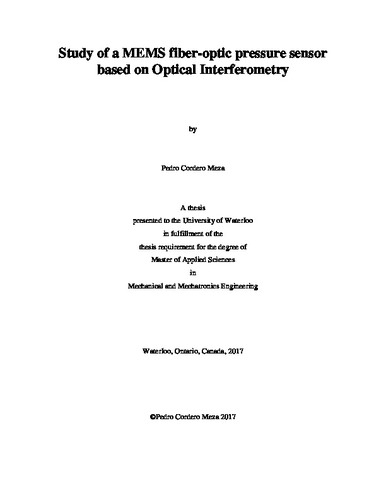 The main focus of this thesis is the development of a MEMS optical pressure sensor capable of giving real-time, accurate measurements to a mid-high pressure range. Some traditional devices for acquisition of parameters such as pressure or temperature have proven to be insufficient to the demands of the markets of research and manufacturing. State-of-the-art sensing technology has led to the construction of more reliable configurations that push the limits of traditional devices. Using micro-machined components is a suitable approach for applications that show restrictions just as limited space, noise measurement or interference created by the inaccuracy of electronic components that are not suited to be in close contact with the sensing medium. A study of the current optical based technologies revealed the current use of extrinsic Fabry – Perot interferometers in the fields of medical, biotechnological and industrial applications. Each field presents a general specific limitation, given the nature of its environment. These mostly include low pressure and temperature ranges, non-protected sensors or super sensitive, expensive devices., The operation of this sensor comprises a non-emissive, optically powered device that shows precision measurements and immunity to electromagnetic interference. Tested over a mid-high pressure range that shows a 20% improvement over the devices found in literature. This sensor is the result of the coupling of a multimode silica optical fiber, a MEMS pressure sensor with a thin silicon film and a stainless steel housing for packaging. A theoretical analysis and response simulations were used previous and along the process of construction and testing of the device. This analysis was followed by an assessment on the materials that were suitable for the assembling of the device, plus the pertinent modifications for each component that allowed a proper coupling. Several tests were done previous to the final assembly of the device, where calibration, alignment and limitations of the device were studied previous to determine the sensor’s response. The experiments were done at the SimsLab of the University of Waterloo, using a pressure chamber with direct connection to the housing of the sensor to avoid pressure leaks. The sensor’s properties include a silicon thin film with a thickness of 34 micrometers, an optical fiber with a core diameter of 125 micrometers, protected by a ceramic ferrule to provide stability and rigidity to the fiber. The fiber is part of a coupler that splits the optical signal between the input and output beams. The output leg of the coupler then sends the information to an OSI (Optical Sensor Interrogator) which is a set of electronics that use a photo detector to break the light into its spectral components, analyzing fringes and converting the photons into electrons which are digitized as a function of the wavelength and read out via a USB port into a host computer. A LabView program then converts the optical response to a value in millivolts that can be directly related to the changes in pressure that are detected by the deflective silicon membrane. A complete characterization of the sensor’s response was carried out. An averaged sensitivity of 1.3768 mV / psi over a range of 0 – 100 psi was found. An accuracy of 1.25 psi per 0.1 mV was established. The Noise Equivalent Pressure measurement could to be neglected over the accuracy that is limited by the capacity of the electronics. In summary, an Optical MEMS pressure sensor was developed. This device is capable of being tested in laboratory and manufacturing-like simulated environments. The pressure measurements acquired during this project assisted the base for a future prototype to be developed in enhancing the pressure range in a harsh environment, with elevated temperature. Proof-of-concept data was gathered and analyzed so further advances can be reached on micro-fabrication and optical techniques.