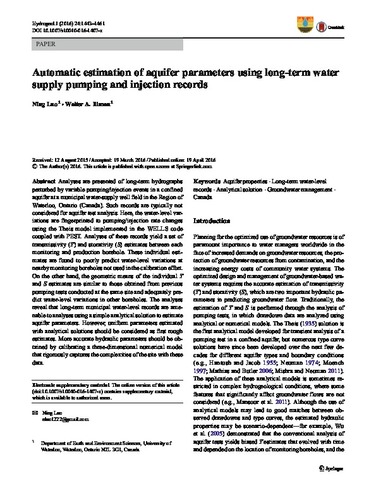 Analyses are presented of long-term hydrographs perturbed by variable pumping/injection events in a confined aquifer at a municipal water-supply well field in the Region of Waterloo, Ontario (Canada). Such records are typically not considered for aquifer test analysis. Here, the water-level variations are fingerprinted to pumping/injection rate changes using the Theis model implemented in the WELLS code coupled with PEST. Analyses of these records yield a set of transmissivity (T) and storativity (S) estimates between each monitoring and production borehole. These individual estimates are found to poorly predict water-level variations at nearby monitoring boreholes not used in the calibration effort. On the other hand, the geometric means of the individual T and S estimates are similar to those obtained from previous pumping tests conducted at the same site and adequately predict water-level variations in other boreholes. The analyses reveal that long-term municipal water-level records are amenable to analyses using a simple analytical solution to estimate aquifer parameters. However, uniform parameters estimated with analytical solutions should be considered as first rough estimates. More accurate hydraulic parameters should be obtained by calibrating a three-dimensional numerical model that rigorously captures the complexities of the site with these data.