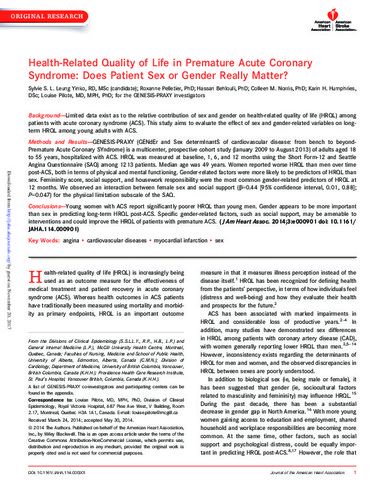 Background-Limited data exist as to the relative contribution of sex and gender on health-related quality of life (HRQL) among patients with acute coronary syndrome (ACS). This study aims to evaluate the effect of sex and gender-related variables on long-term HRQL among young adults with ACS. Methods and Results-GENESIS-PRAXY (GENdEr and Sex determInantS of cardiovascular disease: from bench to beyond-Premature Acute Coronary SYndrome) is a multicenter, prospective cohort study (January 2009 to August 2013) of adults aged 18 to 55 years, hospitalized with ACS. HRQL was measured at baseline, 1, 6, and 12 months using the Short Form-12 and Seattle Angina Questionnaire (SAQ) among 1213 patients. Median age was 49 years. Women reported worse HRQL than men over time post-ACS, both in terms of physical and mental functioning. Gender-related factors were more likely to be predictors of HRQL than sex. Femininity score, social support, and housework responsibility were the most common gender-related predictors of HRQL at 12 months. We observed an interaction between female sex and social support (beta=0.44 [95% confidence interval, 0.01, 0.88]; P=0.047) for the physical limitation subscale of the SAQ. Conclusions-Young women with ACS report significantly poorer HRQL than young men. Gender appears to be more important than sex in predicting long-term HRQL post-ACS. Specific gender-related factors, such as social support, may be amenable to interventions and could improve the HRQL of patients with premature ACS.