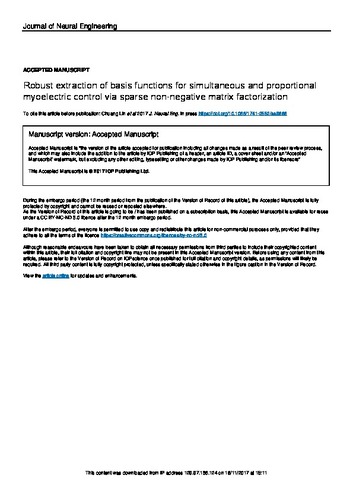 Objective. This paper proposes a novel simultaneous and proportional multiple degree of freedom (DOF) myoelectric control method for active prostheses. Approach. The approach is based on non-negative matrix factorization (NMF) of surface EMG signals with the inclusion of sparseness constraints. By applying a sparseness constraint to the control signal matrix, it is possible to extract the basis information from arbitrary movements (quasi-unsupervised approach) for multiple DOFs concurrently. Main Results. In online testing based on target hitting, able-bodied subjects reached a greater throughput (TP) when using sparse NMF (SNMF) than with classic NMF or with linear regression (LR). Accordingly, the completion time (CT) was shorter for SNMF than NMF or LR. The same observations were made in two patients with unilateral limb deficiencies. Significance. The addition of sparseness constraints to NMF allows for a quasi-unsupervised approach to myoelectric control with superior results with respect to previous methods for the simultaneous and proportional control of multi-DOF. Significance. The proposed factorization algorithm allows robust simultaneous and proportional control, is superior to previous supervised algorithms, and, because of minimal supervision, paves the way to online adaptation in myoelectric control.

Except where otherwise noted, this item's license is described as Attribution-NonCommercial-NoDerivs 3.0 Unported