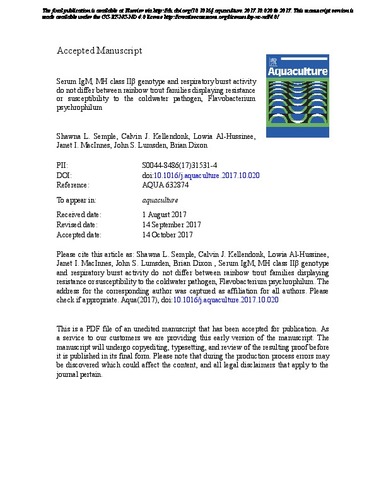 Flavobacterium psychrophilum, the causative agent of bacterial coldwater disease (BCWD) is a significant threat to global aquaculture. True to its name, BCWD tends to occur at temperatures between 8 and 12°C and presents as a systemic disease with characteristic skin ulcerations. Juvenile rainbow trout are particularly susceptible and in these fish the condition is referred to as rainbow trout fry syndrome (RTFS). Resistance to F. psychrophilum is heritable and is not adversely correlated with the growth of fish, thus selective breeding appears to be an achievable approach to its control. The current study explores the connection between resistance to BCWD and several immunological markers. After determining resistance/susceptibility to F. psychrophilum following experimental infection in 40 full-sibling families of rainbow trout, selected families were experimentally infected with F. psychrophilum and differences in antibody production, major histocompatibility (MH) class IIβ genotype and respiratory burst activity (RBA) throughout infection were compared. Serum IgM production increased over time but significant differences between resistant and susceptible families were not observed at either 28days or 120days. Of the six families that were genotyped for MH class IIβ, there did not appear to be specific genotypes that conferred resistance or susceptibility to F. psychrophilum. Further, the RBA of both head kidney leukocytes and whole blood was not significantly different between the resistant and susceptible rainbow trout families. Although the selected immune markers did not differ based on resistance status, the RBA of head kidney leukocytes in all families studied dramatically decreased seven days after infection while total blood RBA remained constant. Day seven was also when severe symptoms and/or mortality due to BCWD was first observed, thus these results may reveal information regarding the pathogenesis of the organism. A better understanding of appropriate immune defenses could provide the basis for breeding programs to effectively combat this costly pathogen, but further study of functional immune markers particularly during the fry stage of development is required.