An Assessment of Hydro-ecological Changes at Two Closed-drainage Basins in the Peace-Athabasca Delta, Alberta, Canada 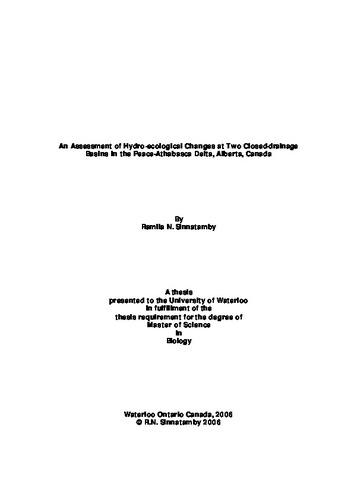 Diatom analyses were carried out on sediment cores collected from two low-lying, closed-drainage basins (PAD 9 - 58º46. 46?N, 111º19. 48?W; PAD 12 - 58º57. 29?, 111º19. 74?) in the Peace sector of the Peace-Athabasca Delta (PAD), Alberta, Canada, to provide >1000 year long records of hydro-ecological change. Results from diatom analyses were compared with macrofossil and stable isotope records from the same cores and assessed within the framework of an Athabasca River headwater climate record inferred from isotope dendroclimate data. Results from PAD 9 and PAD 12 sediment cores indicated closed-drainage conditions during the Medieval Warm Period (MWP) and the post-Little Ice Age and high water conditions during the Little Ice Age (LIA). High water levels at PAD 9 and PAD 12 reflected high water conditions on Lake Athabasca and the Rivière des Rochers or possibly the Peace River during the LIA (~AD 1600-1900). High water conditions were also observed at low-lying sites in the central and southern regions of the PAD (PAD 31 and PAD 37), and corresponded with evidence of high streamflows on the North Saskatchewan River. In contrast, desiccation evident at PAD 5, a site largely isolated from river influence, reflected atmospherically dry conditions during the LIA. Consistent with changes observed at PAD 5, sediment records at PAD 15, an oxbow lake off the Revillion Coupé, demonstrated low flood frequency during the early to mid-1700s. Increased water levels evident at low-lying sites located in proximity to the central open-drainage network of lakes and rivers were likely due to higher flows on the Athabasca River and potentially on the Peace River. High flows on rivers of the PAD may be attributed to snowmelt-dominated runoff during the LIA relative to the rainfall-dominated runoff during MWP (prior to ~AD 1600) and the post-LIA period (~AD 1900 to present).