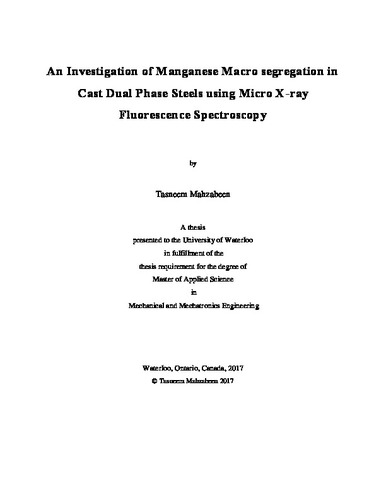 Advanced High Strength Steels with a high manganese content offer an exceptional balance of strength and ductility. However, the occurrence of segregation in these steels, particularly at the centerline, leads to quality control issues in continuous casting. Segregation, which is a non-uniform distribution of manganese in the as-cast structure, originates during solidification. Moreover, segregation of manganese during the continuous casting process can lead to the formation of detrimental martensite bands in subsequent manufacturing operations. Traditionally, macro segregation, which occurs over large distances, has been measured using etching techniques that provide qualitative insights. As the attention on high Mn Advanced High Strength steels is increasing, it is imperative to develop more effective and quantitative methods of measurements. From literature, it is known that segregation is largely influenced by casting parameters such as casting speed and superheat. These parameters have a significant effect on the development and size of equiaxed and columnar zones in the as-cast structure. This research investigates the effects of casting parameters such as the casting speed and superheat, nominal manganese concentration, and spatial orientation on the macro segregation present in as-cast Dual Phase 600 steels. A new analysis technique, using micro X-ray fluorescence, was used to quantitatively measure manganese macro segregation in industrially cast steels and create metrics to assess the macro segregation in the as-cast structure. This technique was validated against a current quantitative method. To assess centerline segregation, four different metrics, using two distinct methods, were developed in this thesis. Each metric measures segregation in different ways, and ranges from calculating arithmetic means to determining segregation spatial sizes. The developed metrics shed light on the spatial behavior of manganese segregation as a function of the selected casting conditions and nominal manganese compositions.